Jaws of Life needed at scene of Thursday accident 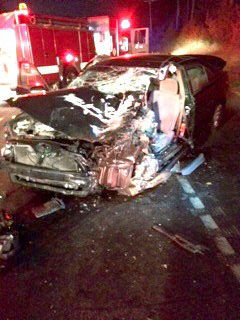 A two-vehicle crash on Louisiana Highway 10 at approximately 5 p.m. Thursday tied up traffic for almost two hours, according to investigating officers on the scene.

The Jaws of Life were required to extricate Loretta Parker, of New Iberia, from her westbound Toyota Camry. Her vehicle swerved into the path of an eastbound flatbed truck near the National Guard Armory, according to Chief Deputy Mike Haley of the Washington Parish Sheriff’s Office.

“She swerved and went under the trailer. She hit with such force that it knocked two tires off the trailer and into the ditch on the opposite side of the road,” said Haley. “Her car flipped around pointing east bound.”

Parker was transported by ambulance to Our Lady of the Angels Hospital in Bogalusa and airlifted to Lakeview Hospital in Covington with moderate injuries, according to Louisiana State Police Troop L spokesman Greg Marchand. Marchand said she was charged with DWI and driving left of center. Parker submitted to blood and urine tests, which are pending.

Units from the Louisiana State Police, the Washington Parish Sheriff’s Office and the Bogalusa Police Department, along with units with the Bogalusa Fire Department worked the wreck.