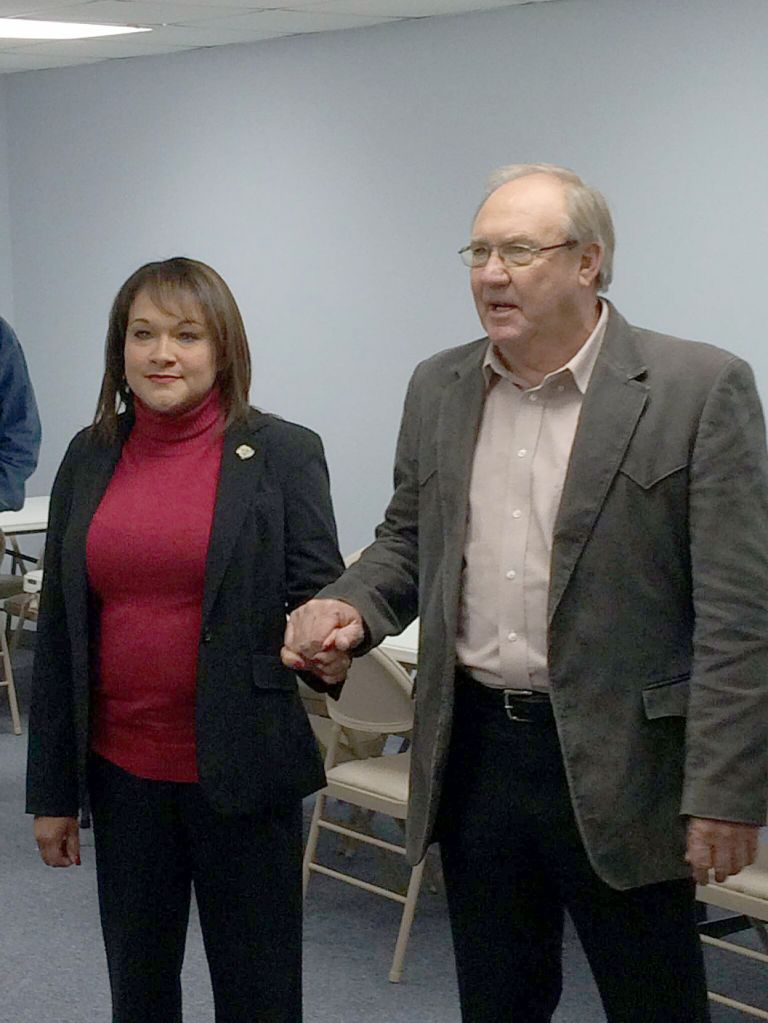 In a surprising turn of events, Bogalusa will see the inauguration of its first female mayor after current Mayor Charles Mizell officially withdrew from the runoff.

With the City Bogalusa’s best interests at heart, Mizell announced Thursday his withdrawal from the Dec. 6 runoff election against City Council Vice President Wendy Perrette during a luncheon at the Washington Parish Sheriff’s Office in Bogalusa.

Mizell, who has served the last four years in office, finished second to Perrette in the Nov. 4 primary. Mizell received 1,066 votes, or 32 percent, to Perrette’s 1,496, or 45.1 percent. Tina Ratliff Boley garnered 749 votes, which amounted to 22.6 percent, for third place in the balloting.

“I evaluated the results. I’m not a mathematician, but I could see two out three voters who wanted to go in a different direction,” Mizell told The Daily News Thursday afternoon. “Rather than dividing the city further, we decided to withdraw. Wendy supported my administration, and I think she’s pretty much on board with all the projects.”

Mizell said he doesn’t look at the election from a personal standpoint.

“I look at it from the city’s standpoint. This is not about Charles Mizell. It’s about me supporting the city from a citizen’s standpoint. I’ll be very supportive of her administration.”

Mizell said he and Perrette have already gotten together a transition plan. He said they would get together Monday to begin the transition period.

“This will be an easy transition as far as I’m concerned,” Mizell said.

It was difficult for Perrette to describe her feelings knowing the place she will occupy in Bogalusa history.

“I’m just humbled. Mr. Charles ran a great race, and the way he did it was very nice,” Perrette said of his withdrawal. “On Monday, I’ll go over to City Hall and look at some contracts on his end. I’m just very humbled. I don’t have a lot to say. I’m just looking forward to working with the city.”

Perrette said one of her first priorities is to get a transition team in place.

“I want to see if we can get a lot more done with less people,” Perrette said. “I’ll evaluate all jobs. We’re going to work together.”

Perrette said she believes the next City Council will be as successful as the last.

“Mr. Charles and the Council have worked well together,” Perrette said. “I think the next Council will have success, as Mr. Mizell had. I’m looking forward to it. I’m ready to put Bogalusa on the map. I think these next four years we’ll get a lot accomplished. ”

Mizell said he really didn’t know himself when he ultimately decided to withdraw.

“After the election, we looked at the numbers and decided it was maybe time to move forward,” Mizell said. “I don’t know if I decided to do it last week or yesterday, but it was something that has been coming since the election. This is not a knee jerk reaction.”

Mizell downplayed accomplishments by his administration.

“I get a lot of credit for accomplishments, but it’s we as a city that get the credit,” Mizell said. “One of the reasons we’re here today is lack of maintenance.”

Mizell said he hoped for a city that is more close-knit.

“I hope the city becomes a community again,” Mizell said. “There are two or three ladies that stand out who did an outstanding job with things we’ve done. I don’t want to start naming names in case I leave somebody out, but they’re some of the best and brightest Bogalusa has to offer.”

Mizell said he is leaving the city better off than four years ago.

“I’m honored to have been mayor for four years. We hope the city continues to move forward with the Industrial Park growth and downtown development. ‘Building a Better Bogalusa’ was my slogan coming in. I think we’ve had a hand in that.”

Mizell said he expects the city to once again flourish.

“I look for new growth with all the young, aggressive leadership,” Mizell said. “We’re still challenged with a skilled labor force here. I’m a team player. I’m excited about things coming up. There’s that $360,000 grant program to rehab houses. And there is the Road Transfer Fund. I’m going to sit back and watch. I think they will be surprised at how successful they’re going to be.”