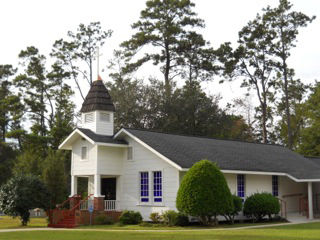 Many rural churches, particularly, function not only as houses of worship, but also as the heart and soul of the communities they serve. The faithful meet together to praise and worship their creator. They also meet to shower newlyweds with things they will need to start a new life together. They welcome babies into their church family with joy and mourn together when one of their own passes.

For almost 200 years a quaint little rural church in Pearl River County a few miles from Bogalusa has been meeting the spiritual needs of the community.

Byrd’s Chapel United Methodist Church, “ the Lil’ Church in the Woods,” has been serving the folks of this area since 1820. Sherrod and Zelfa Rouse Byrd moved to Pearl River County sometime between 1810 and 1820. The Rev. Sherrod Byrd along with his nephew, the Rev. John Ira Ellis Byrd, were both Methodist circuit riders.

The first meeting place for Byrd’s Chapel was a log building on land that had been donated by Peter and Emily Stewart Harvey. It was near what is now Mississippi Highway 43. The current congregation holds services in a beautiful little sanctuary nestled among all of nature’s beauty. It is the fourth building they have built since the first one.

No sign can be found of the original building, which was located on the opposite side of what is now Highway 43. The congregation occupied their second building from early 1850s until sometime in the 1870s. Unfortunately, this building was destroyed by fire. The third building was built and was in use until a tornado hit it in 1934.

Soon after the tornado of 1934, the congregation once more joined forces and rebuilt their church. The current sanctuary was constructed with timber salvaged from the church built in 1870. Byrd’s Chapel Cemetery is reported to be the oldest in Pearl River County.

Byrd’s Chapel has 70 active members and is a vibrant part of the community. Numerous family events such as the annual fall festival and kite-flying day serve as opportunities for neighbors and friends to catch up and enjoy each other’s company. Byrd’s Chapel is a little church with a big heart.

Johnny Sue Stewart, daughter of the late Margie Strahan, along with several ladies from Byrd’s Chapel, started a quilting club. They got together to make the quilts, sold them at the church fall festival, and used the proceeds to pay for the insurance for the church parsonage for many years.

Sunday school begins at 8:50 a.m. for adults and youth and children’s classes begin at 9:15 a.m. Morning worship services are held at 10 a.m. with a nursery provided. A men’s breakfast is held at 7:30 a.m. on the third Sunday of each month. The Rev. Larry Pickering serves as pastor.