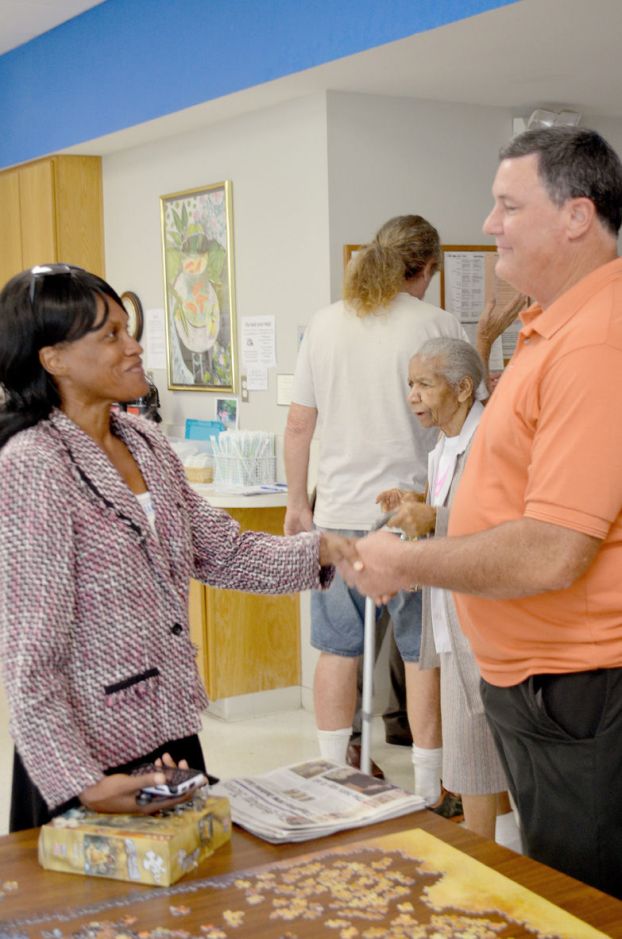 Editor’s note: The following highlights statements made by candidates for mayor of Bogalusa and City Council, District A. Responses from other candidates in attendance will be published in Wednesday’s edition of The Daily News.

Fourteen candidates running in the Nov. 4 General Election participated in an election forum Monday morning at the Bogalusa Senior Center, an event sponsored by AARP and the Council on Aging.

Candidates were allotted two minutes to present opening and closing statements. Sandwiched in between were their answers to specific questions submitted before the forum began.

Candidates were asked their thoughts about the condition of city streets, upkeep of the Senior Center’s building and grounds, their take about the future of the city fire department, how to spur business and how they could assist senior citizens.

“I’ve been in office almost four years,” Mizell said. “I didn’t come from the political arena for this but rather from a business background. There were things that were going that I thought I could help with. We’ve set the pace for the next four years, understanding the workings and mechanics of the city.”

Regarding streets, Mizell said he is not happy with road conditions.

“We’re funding $150,000 a year for repair from local funds,” Mizell said. “And we’ve got the state Road Transfer Program. That’s a $4 million prospect. We’ll overlay streets once the basics are done. We’re working with parish government to overlay Austin Street before the end of the year.”

Regarding the Senior Center, Mizell said he felt the city kept up the facility and grounds adequately.

“I thought we had done a decent job of maintaining the grounds. I’m certainly happy to see all the volunteers who are willing to help,” Mizell said. “I’m proud of the building and how it looks. We think we’ve provided a picturesque place. I’d be a better mayor if we had $4 million. It’s all about the money.”

MIzell said he has asked Fire Chief Richard Moody and Police Chief Joe Culpepper for budgets to fund each one.

Regarding business, Mizell said his administration has been business-friendly.

“We have a track record. See Cassidy Park and General Dynamics. We need quality people there to fill those jobs. Look at the 12 to 15 new businesses on Main Street. Revenue is up, but we can’t keep up with the mandates from Baton Rouge. We have to continue to invest in our city.”

“Transportation is a key component,” Mizell said. “It’s a quality-of-life issue and is what the mayor and the city are about. We’ve worked with the medical center asking about access to medical care.”

Perrette has served 12 years on the City Council and was elected to an at-large seat. She has served five years as council president and four as vice president. She is a former school teacher.

“We’ve had a lot of difficult decisions to make in my 12 years,” Perrette said. “When I first ran I wanted to instill honesty and integrity to the Council, and I think I’ve done that.”

On street condition: “We have to fix what’s under the streets. We do have poor streets. It costs $127,000 a block to overlay it. There is some grant funding for that. One of my top priorities is roads. Drainage is an issue, and we have to fix that problem first.”

On the Senior Center: “The building has been maintained very well. Grass is a huge problem, but so is everybody else’s. The city gets around to it as best it can. Everybody is willing to do what they can to maintain their property.”

On the Fire Department: “Without the police, fire department and Public Works, we don’t have a city. Our fire rating is one of the lowest. I’m not in favor of a volunteer fire department. That’s not a good decision.”

On helping seniors: “I would like to see more transportation for seniors. They need more ways to get out and about.”

Penny Williams is the District A incumbent. She faces Gloria Kates and George Williams in the election.

“I’ve been active in the community for 25 years, including serving the last four on the Council,” Williams said. “I’m working with the Bogalusa School System and I’m a trained scout master. I’m a mom of three and a grandmother of four.”

On streets: “To me, if drainage is the problem, it needs to be fixed first.”

“I’ve been here over 14 years,” Kates said. “I’ve been a trailblazer since. I want to develop neighborhood associations to get a voice in City Hall. I believe in developing children sports-wise and in the arts. Road safety is important. I would like to strengthen Meals on Wheels and other programs. My educational experience and U.S. Army experience has prepared me to be an effective councilwoman. I want to promote the concerns and interests in the district.”

On streets: “I’ve been on the campaign trail speaking about roads. I agree with the grant process. If we have the opportunity to apply for a fully loaded grant, we should do it.”

On the Senior Center: “My operational plan is to nurture and develop volunteers and educate in the mission of AARP and this building.”