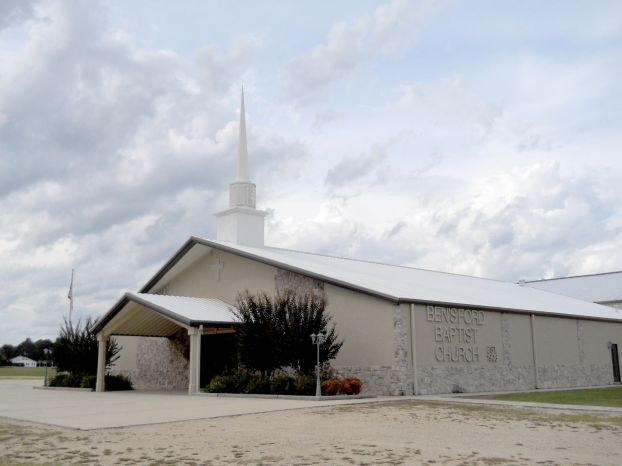 Ben’s Ford Baptist Church has been sharing the word of God with this community since its inception in October 1908. Nine people met in an old schoolhouse about a mile from the present location of the church, with Bro. Willie F. McGehee leading the small group of believers.

The church met on property once owned by Ben Richardson who used the ford across the Bogue Lusa Creek as a cattle crossing, hence the name, Ben’s Ford. Mary Emily Mathilda Byrd sold the land where the church now stands to the Washington Parish School Board, which built a school for the community. Byrd was the mother of two of the charter members of the church and requested that the property be used for church purposes also.

In 1929 Ben’s Ford purchased an adjoining acre for $30, doubling their land. The following year the church installed electric lights. Money was hard to come by during the depression, but the giving spirit that characterizes Ben’s Ford to this day was evident in the 12 church members who agreed to take turns paying the church electric bill.

In1946 Ben’s Ford School closed, and the church acquired the buildings. Since then building that has taken place throughout the years to accommodate the expanding congregation. Ben’s Ford Christian School opened its doors more than three decades ago.

The rapid growth necessitated two services, even with extensive renovations to double the sanctuary’s seating capacity. The present sanctuary was completed in 1990, allowing the old facility to be used for Sunday school and fellowships.

The hand of the Lord has been evident on Ben’s Ford with physical evidence, but much more important than buildings and land are the souls that have been saved through the ministry.

According to the church’s website, Bensford.com, this church celebrates more than 100 years of answered prayers and undeserved blessings. God has worked miraculously to heal physical diseases, mend broken hearts, lift up the downcast, put back together broken families, salvage destroyed marriages and increase the witness of this church in both power and presence.

Brother Lynn Martin has led the congregation at Ben’s Ford for 36 years.

Martin stated, “We have praying people here, and the Lord has blessed us tremendously. We love people and welcome visitors to come and join us. We have a bell choir of about 40 children ages 4 years to about 7. We have AWANA for the children, and Refuge is our group for teenagers.”

Secretary Jammeye Galloway said, “Our recent 106th homecoming was wonderful. It was a great time of fellowship and celebrating what the Lord has done.”