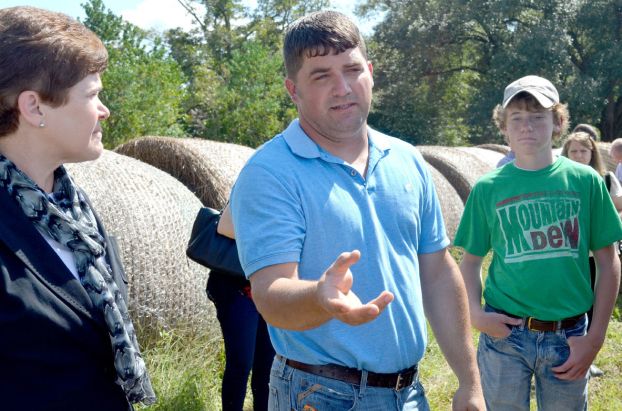 The officials visited the family farm of Mikeal and Rhonda Thompson and son, Justin Thompson, Tuesday. The Thompson farm is located on Williams Road in Franklinton.

USDA Deputy Secretary Krysta Harden got a walking tour of the farm and saw how the Thompsons used a micro-loan to purchase a $28,000 hay bale wrapper to cut down on wasted hay.

“It’s just to get on the land and see how our programs are actually used and benefit farmers like Justin and his family,” Harden said. “Having grown up on a mom and pop peanut farm in southwest Georgia, knowing that passion for the farm motivates me. It’s all about caring for your resources. Approximately 99 percent of the U.S. population doesn’t understand what us 1 percent do. We want to keep the farmers on the farm and the ranchers on the ranch.”

“The micro-loan helped us,” Thompson said. “We were able to purchase equipment, which added value to our operation.”

Before acquiring the loan, Thompson said much of the hay was left to spoil unprotected.

“We stored the hay outside before the micro-loan,” Thompson said. “Wrapping the hay protects it. We wrap the baleage hay and sileage. We went from 30 percent waste to 0 percent waste using the Tube Line Wrapper. We were also able to purchase another 50 head.

“The FSA mission is to support agriculture in the form of operating capital and risk mitigation,” McCain said. “We are especially about young and beginning farmers having access to their capital. What we’ve done here today is highlight an example of a young farmer who had access to that capital and expanded his operation.”

Norton said the farm is an example of how his agency works.

“Our agency is only successful when agriculture producers implement conservation practices on farms like this where a pond was developed for livestock and wildlife grazing management and fertilization for forage production,” Norton said. “That all combined to yield this bountiful harvest.”

Cash and synthetic marijuana were seized during the arrest. read more