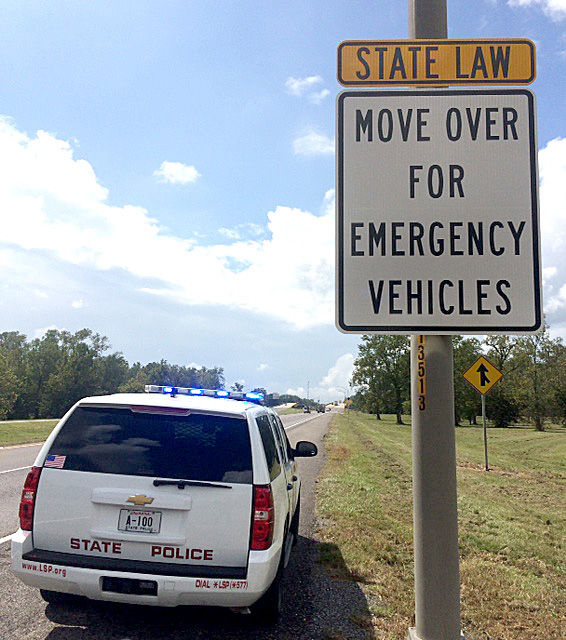 New ‘Move Over’ signs aimed at protecting those who protect public

In support of Louisiana’s “Move Over” law, Louisiana State Police Superintendent Col. Mike Edmonson, alongside Louisiana Department of Transportation and Development Secretary Sherri H. LeBas, announced the installation of several dozen “Move Over for Emergency Vehicle” signs across the state.

The highly visible signs, strategically placed along major travel routes and state line crossings, will serve as a reminder to motorists not only of state law requirements, but also of the importance to keep first responders, emergency workers and stranded motorists safe along Louisiana’s highways.

Louisiana’s “Move Over” law requires that drivers, upon approaching any vehicle stopped on or near the highway utilizing warning lights, shall yield the right-of-way by making a lane change into a lane not adjacent to the parked vehicle, if possible with due regard to safety and traffic conditions. If a lane change is not possible, the driver shall slow to a reasonably safe speed before passing the stopped vehicle. The “Move Over” requirement applies not only to first responders, such as law enforcement, ambulance and fire/rescue crews, but also to highway workers, tow and recovery truck operators and any vehicle utilizing hazard/warning lights. Motorists who violate the “Move Over” requirement are subject to fines up to $200.

Since 2010, traffic-related incidents of first responder injury or death have continued to rise. Traffic fatalities involving law enforcement officers in the United States have increased by 33 percent compared to last year. More first responders are killed by traffic crashes than by any other line-of-duty cause. Across the United States preventable “Move Over” violation crashes kill an average of one tow truck driver every six days, 23 highway workers and one law enforcement officer every month and five firefighters every year. In an effort to protect emergency workers and citizens from passing motorists, 49 states have passed “Move Over” laws requiring motorists to take prudent action when approaching stopped vehicles on the shoulder.

“First responders across our state and the nation routinely risk their lives to provide emergency services to citizens in need on our roadways,” said Edmonson. “While Louisiana’s Move Over law has been in effect for a number of years, these signs will bring increased awareness to the responsibility each driver has to keep both our emergency workers and citizens safe.”

“I am very happy to see the installation of these signs,” said LeBas. “They will be a constant reminder to motorists on proper driving etiquette when encountering emergency vehicles on the roadway, and most importantly it will help keep our emergency vehicle personnel safe.”

Troopers urge citizens to remember that Louisiana’s “Move Over” law keeps everyone safe. Whether approaching a law enforcement vehicle, tow truck or a local neighbor changing a flat on the side of the road, slow down, exercise extreme caution and move over to keep them safe.