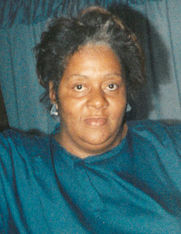 Brenda Diane Sheridan, age 62 and a resident of Angie, passed away Tuesday, Sept. 16, 2014, at her residence in Angie.

On June 18, 1952, Sister Brenda was the third of 10 children born to the late Ezekiel and Lela Mae Rayford Sheridan.

Sister Brenda faithfully attended Sunday school and Bible study yearning to know more about Jesus. Sister Brenda was a team player. She supported her children, nephews and nieces in school and community activities. Several of her favorites were supporting the Band Booster, Quarterback Club, Project Grad and Little League baseball and football.

She was preceded in death by three sisters, Arleatha Sheridan, Lenda Sheridan and Doretha Sheridan.

Visitation will be held Saturday, Sept. 27, 2014, from 10 a.m. until noon at Live Oak United Methodist Church, with the funeral service to follow at noon, with the Rev. Terrance August officiating. Interment will be held in Live Oak Cemetery in Angie. Crain and Sons Funeral Home of Bogalusa is in charge of arrangements. Sign the online guestbook at www.crainandsons.com.