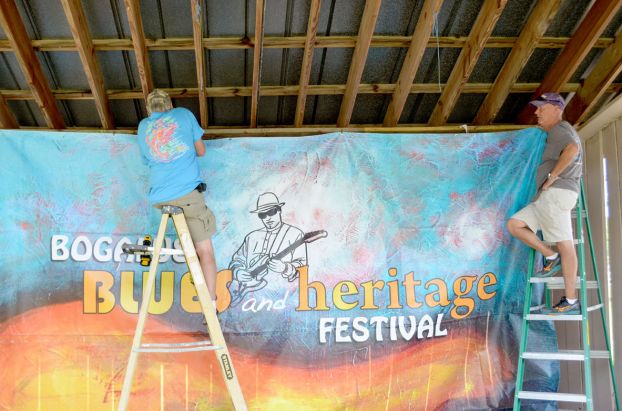 The third annual Bogalusa Blues & Heritage Festival is about more than just music, food and games. It’s another opportunity for the city of Bogalusa to put its best foot forward and show outsiders what the city and its people are about.

The Festival kicks off today and runs through Saturday night at Cassidy Park. The Festival added Friday to its 2014 schedule.

“We’re real excited to offer another evening of music. We got such a great response last year,” Marcelle Hanemann, BBHF publicity chairman said. “We wanted to offer a little bit more this year. We thought Friday evening would be a good start.”

Friday, Big Daddy O kicks off the musical entertainment on the Blues Stage at 5 p.m. That is followed by the popular Walter “Wolfman” Washington at 6:15 p.m. Paul Thorn takes the stage at 8 p.m.

“Walter ‘Wolfman’ Washington will have everybody howling at the moon Friday night,” Hanemann said.

Saturday’s earlier Blues Stage schedule has Big George Brock starting things off at noon, followed at 1:15 p.m. by Johnny Sansone with guest Chief Monk Boudreaux and the Golden Eagles. Mike Zito & the Wheel play at 2:45, followed at 4:30 p.m., by the Devon Allman Band. The Ruthie Foster Band plays at 6:15 p.m.

Headlining Saturday’s Heritage Stage is Dwayne Dopsie & The Zydeco Hellraisers. They play from 6:15 to 7:30 p.m.

“We’ve just grown solidly each year,” Hanemann said. “The response this year has been phenomenal. There’s going to be many thousands of people attending, and they are going to have a great time.”

Tickets are $10 per day in advance and children 12 and under get in free. Tickets can be purchased online at www.bogalusablues.com.

“New this year are canoe rides,” Hanemann said. “And the splash pad will be open. Everybody loved our harmonica workshops last year. We’ve been working all year to get this together.”

Hanemann said 5,000 attended last year’s event. She said she expects that number to double this weekend.

“We’ve got music all day on two stages Saturday, plus great regional specialty food and hand-crafted art. It’s just a high-quality festival all around.”

Hanemann said the festival puts a good face on the city.

“I think the festival is good for us because it brings people in from outside, and they bring money,” Hanemann said. “They get a good feeling for Bogalusa, and that’s what it’s all about. We’re ready and invite everybody to come out and have a great time so we can show our Bogalusa hospitality.”