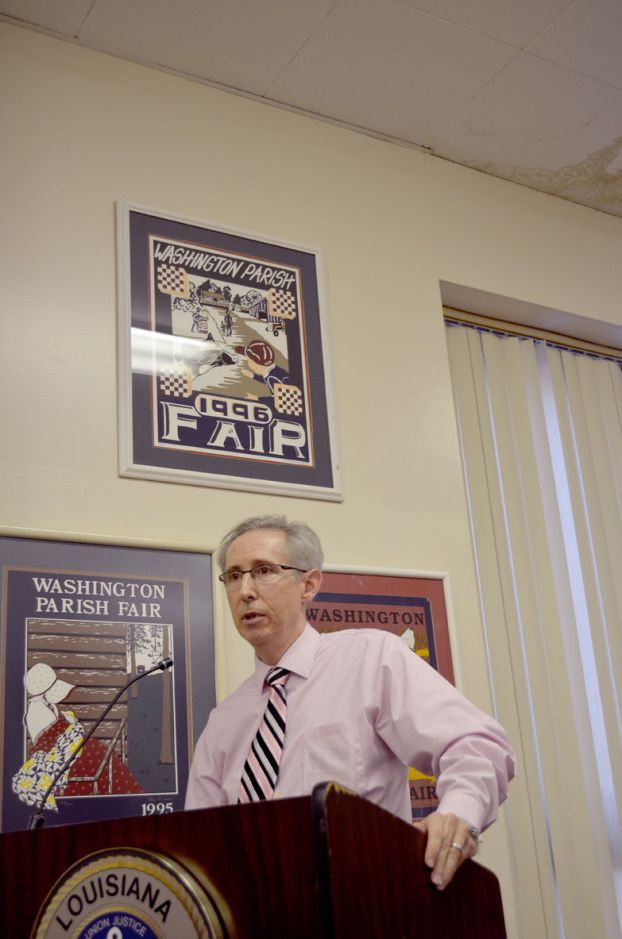 The prolonged battle between the officials of Riverside Medical Center and those of St. Tammany Parish Hospital over St. Tammany’s operation of the Family Medical Clinic in the parish appears to be nearing an end.

Magee said a Sept. 18 meeting between officials from both facilities proved to be fruitful. The meeting included Riverside Chairman of the Board of Commissioners Lionel Jones, board member Brent King and Magee. St. Tammany was represented at the meeting by C.E.O. Patty Ellis, St. Tammany Chairman of the Board of Directors John Evans and board member Tom Core.

“It was a very productive meeting,” Magee said. “We’ve agreed in principle on the details. We’ve got some minor things to be hammered out in the language. The exchange will only help health care in the community.”

Magee said he hoped final details of the agreement could be finalized “in the next couple of weeks.”

Magee notified the Parish Council too late to be placed on the agenda. Parish President Richard Thomas ceded some of his time to allow Magee to address the council.

“This is an opportunity for the boards and CEOs of the two hospitals to sit down and talk about working together for the benefit of the citizens of Washington Parish,” Magee said. “We talked about services we could deliver and services St. Tammany could deliver and have a partnership where it’s good for both hospitals.”

“We’ve made a lot of progress in the way of health care,” Councilman Kenneth Wheat said. “Anytime you’re making progress, there’s going to be challenges. You’ve met those challenges.”

Councilman Greg Route was appreciative of the apparent agreement.

“It wasn’t about Family Medical Center. It’s wasn’t about Riverside,” Route said. “It was about the people of this parish.”

In late August, the Council adopted an amended resolution to allow St. Tammany to operate Family Medical Clinic in Franklinton for the next five years.

During a July 7 meeting, the Council voted to keep Family Medical Clinic operating as part of St. Tammany Parish Hospital for the next 20 years, but Riverside’s operators objected to that agreement, and it was rescinded. The clinic is located on Riverside Drive next to Riverside Medical Center.

A stipulation of the amended resolution said the five-year extension was subject to approval by resolutions by the boards of commissioners of both Riverside Medical Center and St. Tammany Parish Hospital.

That July 7 meeting had a passionate standing-room-only crowd. The large number in attendance caused the meeting to be moved upstairs into the courtroom. Backers of both entities offered emotional pleadings until the council voted. Council Chairman Michael Fussell admonished both sides and recommended they get together immediately on particular sticking points before he issued a “no” vote on the resolution. His vote was the lone dissenting vote from the Council.

According to testimonies, revenue generated by Family Medical Clinic was the major sticking point. In comparative statistics provided by Riverside, St. Tammany generated slightly more than $7.1 million in net revenue last year compared to the $1.5 million Riverside received from St. Tammany for its services.

In other business the Council re-appointed Walter Smith to the Fire District No. 9 board.

Also, Thomas noted the Washington Parish Free Fair flag raising for Bogalusa is Thursday morning at 10 at City Hall. Franklinton’s flag raising is at the same time on Friday at the courthouse.

“If you see a road sign missing, report it, especially if it’s a stop sign,” Thomas said. “I just can’t believe people would steal a stop sign. In the future, we’d like to stamp them with ‘Washington Parish Government’ in stencil.”

DAILY NEWS PHOTO/David Vitrano With the Washington Parish Free Fair less than a month away, the 2014 T-shirts will be... read more