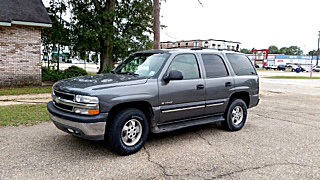 After the sale was completed, both the seller and buyer went their separate ways. Deputies pursued them and arrested two persons.

Roxanne Bernadette Fortenberry, 25, of Bogalusa was arrested and charged with possession of Schedule II drugs.

She was placed in the Washington Parish Jail, with bond set at $5,000. She met the conditions of her bond and was released later in the day.

Pernell D. Mingo, 36, Varnado, was arrested and charged with three counts of possession with intent to distribute Schedule II drugs. Mingo is in the Washington Parish Jail with no bond.

According to the Sheriff’s Office, a significant amount of illegal drugs and cash were seized from Mingo, along with the Chevrolet Tahoe he was allegedly using to transport and sell drugs.

“Let this be a lesson to drug dealers,” Sheriff Randy Seal said. “We are watching you and will arrest you when we have cause to do so.

He continued, “I commend our Drug Task Force detectives for their continued effort to identify and arrest drug dealers in Washington Parish.”