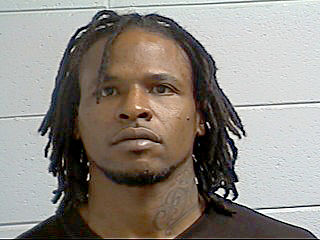 An arrest was made Monday evening in the weekend killing of a Bogalusa man on Donnell Street.

Larry Dupre Alderson, 38, of Pomona, Calif., was taken into custody at a bus station in Mobile, Ala., at about 10 p.m. Monday. Alderson, who has lived in the Bogalusa area for approximately three months, was charged with first-degree murder in the slaying of 27-year-old Jonathan C. Roberts of Riverside Drive in Bogalusa. Roberts’ body was found at approximately 8:30 a.m. Saturday behind Thirkield United Methodist Church.

Bogalusa Police Chief Joe Culpepper said Alderson has approximately 12 aliases. He was arrested in Mobile with companion Brooke Ramsey, 23, of Bogalusa. She was charged for accessory after the fact to first-degree murder.

Culpepper said it is believed the murder weapon was a 9mm handgun. He said the weapon has been recovered. Culpepper said all of the evidence in the case will be sent to the appropriate state crime labs.

“Our investigation was almost like hitting dead ends with all the unsuccessful leads,” Culpepper said. “Then Monday afternoon business picked up and more leads began coming in that led us to obtain warrants for the arrest of Larry Dupre Alderson. Through witnesses, we were able to determine their location.”

Culpepper noted that the community was key in apprehending Alderson and Ramsey.

Culpepper said another individual was interviewed in the case. He said it has not been determined if an arrest warrant will be issued for that person.

Culpepper said Roberts was at his home when he was initially confronted by Alderson. Roberts fled the attack and ran about two blocks to the rear of the church.

Culpepper said Alderson has criminal warrants in Pomona for a variety of violent crimes, including carrying of a concealed weapon.

Culpepper said the community can take a deep breath as a result of the arrest.

“For a short time, the community was on edge,” Culpepper said. “This is everybody’s community. We are not in this fight alone. We need everybody’s support.”

Local volunteer has helped feed the needy for 26 years