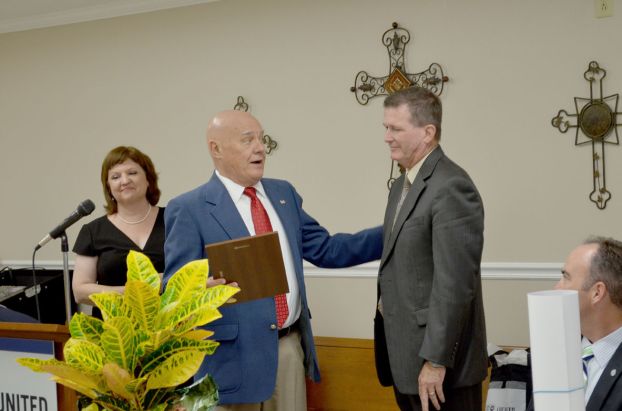 Although the cause was serious and the mood of the day was somber, one could not help feeling the sense of hope and promise in the air as the United Way of Southeast Louisiana kicked off its local fundraising efforts Thursday with a luncheon at First Baptist Church of Bogalusa.

The theme of the event was “Education, Income and Health,” and featured speaker Dr. William Wainwright, chancellor of Northshore Technical Community College, drove home the importance of meeting all three needs in the community.

“Education knows no boundaries,” he said, as he shared his own story of rising from high school dropout to earning a doctorate and attaining his current position at the technical college.

He said through the work of local charitable organizations, he was able to rise above his circumstances to become the first in his family to progress beyond high school.

“We engaged in a system of services,” he said. “That GED is what changed my life.”

He explained that as chancellor one of his duties is to identify current needs and expand the college’s offerings to meet those demands. Such thinking has led to NTCC widening its offerings to include a health sciences track and to continue to meet current workforce trends through programs such as dual enrollment, which allows high school students to take classes that focus on “critical, relevant career opportunities” at the college as part of their regular curriculum.

Another initiative he expounded on was Connect to Success, which allows NTCC students who wish to continue their studies at a four-year institution a seamless transition to Southeastern Louisiana University.

“The need was out there,” said Wainwright. “It was not being met.”

During his talk, Wainwright touched on the inextricable connection among education, income and health, noting that those with higher levels of education generally enjoy a more stable social structure, higher income levels and better access to health care.

Following his speech, Wainwright was presented a 2014 Bogalusa Blues and Heritage Festival poster as a token of appreciation from United Way.

And appreciation was the order of the day as Executive Director Charlotte Champagne recognized those whose efforts have had an especially large impact on the United Way’s local efforts.

She presented framed certificates to International Paper, Rayburn Correctional Center, Entergy, Centerpoint Energy and the Washington Parish Clerk of Court’s Office for being the top five local fundraising organizations. A special recognition was bestowed upon Johnny Crain Jr. and the rest of the Clerk of Court’s Office for having the largest growth in its fundraising campaign.

“100 percent of their employees contributed to United Way,” said Champagne, who noted the office doubled the amount of money raised.

Crain explained some of his personal motivation for giving to United Way.

“One year, we got to go out and see where our money went,” he said. “It just touches you when you can see where the money goes.”

“We are so proud of our partner agencies and the work that they do,” she said.

The kickoff continued Friday with a Saints tailgate party at the Washington Parish Courthouse in Franklinton.

In its continuing efforts to shore up the flagging school district, the Bogalusa City School System is focusing on strengthening... read more