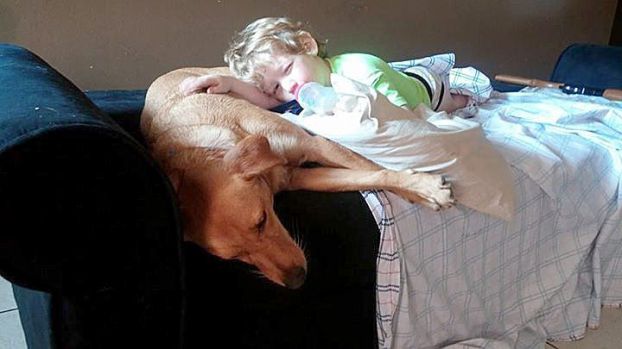 Little did Covington’s Shelley Taylor realize when she acquired Goldie, a golden retriever and lab mix dog through the Magnolia Chapter of the Humane Society of Louisiana that the animal would eventually be a personal nanny to her special needs child.

“Originally, we were looking for a dog for another pet,” Taylor said. “My son, Peyton, has a lot of sensory problems. I wanted a dog that could go to the hospitals to visit kids and older people.”

Goldie and her puppy were picked by Bogalusa Animal Control Officer David Kellis just before the end of 2013. The puppy was adopted and Bogalusa’s Belinda Martin picked up Goldie on New Year’s Eve to foster until Taylor adopted her in April.

Taylor said it didn’t take long for them to become attached to Goldie.

“We just fell in love with her,” Taylor said. “She’s got the best disposition ever. I started doing research. Peyton’s problems are closely related to Autistic children. That was when I got the idea to use Goldie as a service dog. She has an 18-inch tether strap. One goes on him and one goes on her, and I’m behind them with a longer leash.”

Taylor said Goldie has learned all the necessary commands.

“My son is a runner,” Taylor said. “She has done wonders for him. When he is on the tether, he thinks he’s in control, but he is not.”

Goldie is registered as a service dog.

Martin said she was glad she answered the call to foster Goldie. She currently has five dogs. The Magnolia Chapter currently has 30 foster homes.

“I was not going to get another dog for a while, but they’re always in danger of being put to sleep,” Martin said. “We brought her home and got her acquainted with our dogs here. We got her shots updated and wormed her.”

“I could tell she was smart,” Martin said. “She minded us and went out to do her business whenever we told her to go. She would play with her ball. I was about to give up finding a home for her until Shelley contacted us. Shelley told me she is a caring dog.”

Kellis said approximately 150 to 200 dogs were rescued from the pound last year. He contacts the Magnolia Chapter whenever the pound is full. The pound has 14 pens for stray or unwanted dogs.

“I send the Magnolia Chapter a picture of the dog when we get them in,” Kellis said. “Our limit is 14, but we can double or triple up the small dogs,” Kellis said. “I’ve had as many as 50 dogs in there at one time.”

“They’re a lot of help. For every dog they get they save the city money. And that’s a dog we don’t have to euthanize,” Kellis said.

Goldie has gone through a second round of heartworm treatment, but Taylor said her problems make little difference.

“She’s well worth the expense for the job she does,” Taylor said. “She makes sure everybody is tucked in at night. She’s a tremendous blessing to the whole family, especially my son.”