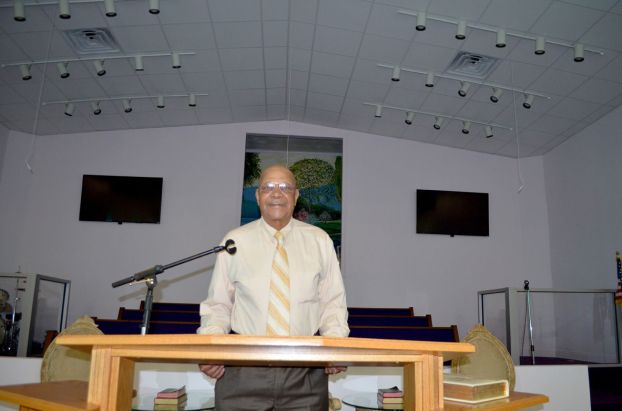 Greater Ebenezer pastor in his 4th decade as church leader

Greater Ebenezer Baptist Church, founded in 1926 and located at 1104 Poplas St., recently completed a total remodel of its sanctuary. The new carpet and furnishings provide a lovely and comfortable place for the community to come out and worship.

On Sunday mornings Dr. Raymond E. Mims Sr. fills the pulpit, as he has been doing for 36 years.

According to Mims, “The most exciting time in my ministry occurred in 1978. I had been preaching for one year, and I preached here at Ebenezer one week while they were searching for a pastor.

“The following Sunday I was to preach at Hearts Chapel in Mississippi at 3 o’clock. For some reason I got up early and was all dressed and ready to go except for putting on my tie. My wife, Shirley, said, ‘Raymond, why are you up and dressed so early? You don’t have to preach until 3.’

“Truth was I had no idea why I was up and ready so early, but the Lord knew. I had asked the Lord for a sign as to what direction I should take in my career, and this morning He began to reveal His plans for me.

“At 10:45 the phone rang and it was Deacon Robby Cooper from Ebenezer. He told me the gentleman who was to preach couldn’t come. He had been called in to work, and I was invited to preach with only a few moments notice. All I had to do was put on my tie.

“They called me as pastor, and I have been here for 36 years. I have seen four generations of young people come through this church. Shirley and I have always felt a strong desire to encourage the youth of our community to get an education.

“In our early years of ministry, Shirley and I always checked report cards and gave cash awards for honor roll and banner roll. After several years the church took over this ministry. We have seen many, many of our youth complete high school and college. We have seen them go on to very lucrative and successful careers.”

Mims’ love of the people of Bogalusa and strong belief in the benefit of a good education has led him to serve on the Bogalusa City School Board for the past 21 years. Mims was unopposed in the last election and will serve for four more years at least.

“If you give the Lord his 10 percent by tithing, He will always take care of you. That doesn’t mean that you won’t ever have a financial challenge, but it means that someway, somehow things will work out for you if you put the Lord first,” Mims said.

Greater Ebenezer Baptist Church’s Sunday school begins at 9:30 a.m. on Sunday mornings, followed by worship at 11 a.m. A prayer meeting is held on Wednesday nights beginning at 5 p.m. All are welcome.