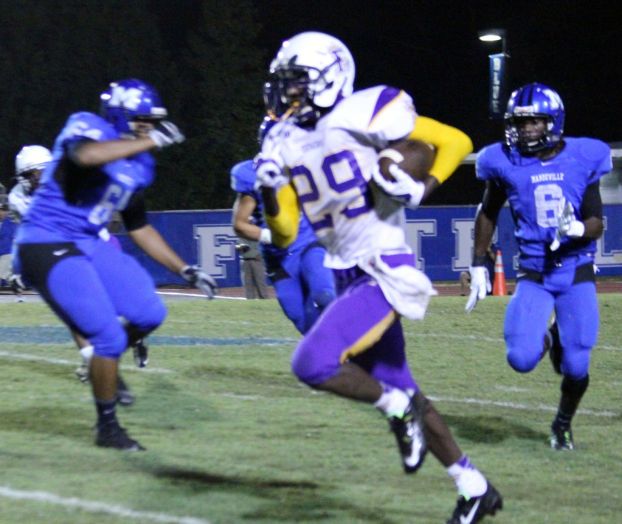 Bogalusa and Franklinton fall in jamboree

In the middle game of the jamboree John Curtis of River Ridge topped Covington 28-7 after jumping out to a 21-0 lead in the first half.

Salmen bested the Lumber Jacks, 21-0, in a turnover-filled contest. Mandeville, a Class 5A squad, shut down the Demons’ offense for most of the tilt to take a 10-7 victory.

All three games featured a pair of 15-minute halves.

In the opening matchup, Salmen put its first touchdown on the scoreboard at the four-minute mark as senior Jatairee Hudson scored on a two-yard run putting the Spartans up 7-0 with Salim Yileh’s extra point.

Just before the end of the first 15 minute half, Hudson scored again for the Spartans on a 35-yard fumble return on a pitchout from quarterback Tymothy Toussaint to put the class 4A Spartans ahead 14-0 at halftime.

With just under five minutes remaining in the contest, Salmen scored its final six of the night as quarterback Jamie Passaro hooked up with James Lambert on a 25-yard completion, and with Eddie Smith’s extra point conversion the final tally was 21-0.

In the contest Bogalusa committed four fumbles, while Passaro threw a pair of interceptions for Salmen. The first was grabbed by Salehal-Dien Pittman in the first half, and the second takeaway came from Toussaint.

“We had our defense on the field far too long because of the turnovers, and that is a recipe to lose games,” said Bogalusa coach Craig Jones.

Toussaint finished 6-of-12 passing for 62 yards. He also picked up six yards on the ground on three carries while scrambling under pressure.

The Jacks open the regular season Friday at home against Kentwood.

In the nightcap, less than four minutes into the game junior defensive back Tremario Magee picked off Skippers’ QB Jonathan Penton and raced 61 yards with the pick six to secure Franklinton’s only score of the evening. Connor Ackerman booted the PAT and the Demons led 7-0.

Three minutes later Penton found Brant Moisant on an 11-yard reception to knot the game at 7-7 with Parker Pastorello’s PAT.

With two seconds left, Pastorello hit a 32-yard field goal to put Mandeville up for good, 10-7, at halftime.

In the second half, Pastorello attempted a 44-yard field goal that sailed wide left. The Skippers’ defense held the Demons in check until the final four minutes of the game before Franklinton managed a first down.

The Demons had more penalty yards up to that point than offensive yards.

“This had to be the worst performance of our offense that I can remember in my years of coaching,” said Shane Smith, the Demons longtime mentor.

“Mandeville did a good job defensively, but I think our guys were playing on emotion rather than playing within their abilities,” added Smith. “We need to focus on the game plan and what we are capable of doing not riding a wave of emotion because that is something that goes up and down.”

Franklinton opens the season Friday on the road at Tylertown, Mississippi.