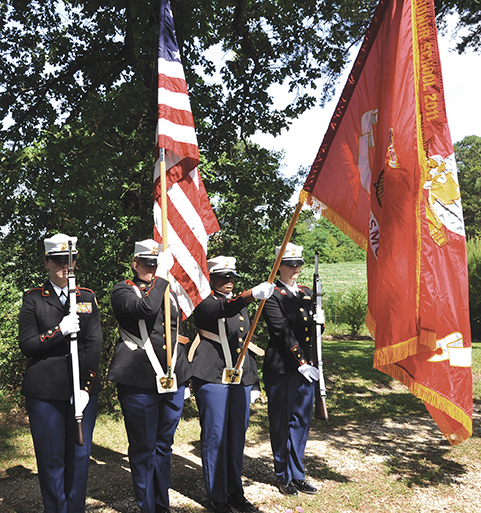 More than 100 people gathered at Fisher United Methodist Church Cemetery Monday for a solemn tribute to veterans who have given the ultimate sacrifice for their country.

The Memorial Day program, conducted May 26 by American Legion Magic City Post 24 at the Richardson community church, began with the presentation of colors by the Franklinton High School Marine Corps JROTC Color Guard.

He was introduced by Post 24 Vice Commander Mike Henley, who discussed Smith’s 30-year career in the Marine Corps.

A member of the helicopter squadron, Smith was deployed to Vietnam in 1965, serving about 13 months there and flying more than 400 combat missions.

For his service in Vietnam, Smith earned the Purple Heart, the Distinguished Flying Cross and 26 air medals.

After years of service with the Marine Corps Reserves, he finished his career at Marine Corps Headquarters in Washington, D.C., serving in the aviation section until his retirement in 1993.

Smith spoke about the meaning behind the Memorial Day observance and how members of the military fight because they believe “not that war is good, but that sometimes it is necessary.”

“Our soldiers fight and die not for the glory of war, but for the prize of freedom,” he said.

He discussed how ordinary citizens are inspired to rise to the challenge of battle and are willing to sacrifice their life in service to their country because of the values of loyalty, duty, respect, selfless service, honor, integrity and personal courage.

“These values have made this country strong and, carried into the future, will continue to keep us strong,” he said.

Smith asked attendees who they think of on Memorial Day, and he told them about the people who come to his mind on that day and many others.

“I think of all the brave men and women I have served with in the military, and am proud to have been a small part in maintaining the freedom we enjoy,” he said.

Next, the women of Fisher United Methodist Church placed poppies on veterans’ graves, as the service members’ names were read by Belkap.

The ceremony concluded with the firing of a 21-gun salute by the Post 24 Funeral Detail, the playing of taps by Rushing and the retiring of the colors by the MCJROTC.