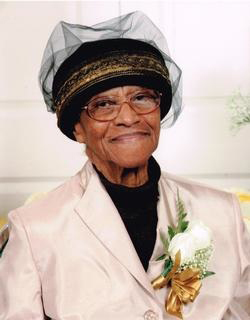 WATSON
Velma Tate Watson, 104, was born Jan. 5, 1910 to the union of Murray Tate and Poline Cutrre-Tate, the third of eleven children born to her father, and died Thursday, May 15, 2014.
Her mother died when she was very young. Her siblings, Myrtis, Wilton, Inez, Eula, Jessie, Arnice, Stella, Mitchell, James, John, Jerome and Willie-Earl Tate, all preceded her in death, except Stella.
Velma accepted Christ at an early age and became active in the duties of Mount Olive Missionary Baptist Church in Sunny Hill, La.
Later in life she joined Greater St. Stephen Full Gospel, where she became an active member. She later married Ellis Watson, and from that union a daughter, Ora Lee Watson-Summers, was born.
She leaves to mourn, her daughter; two grandchildren, Mack Keir Summers and Nicole Summers-Roberson; four great-grandchildren, Keirra M. Summers, Kia M. Summers, Carl Anthony Roberson and Baylee N. Roberson; grandson-in-law, Carl Roberson; granddaughter-in-law, Patricka C. Summers, one sister, Stella Tate; and one sister in-law, Bernice C. Tate, as well as a host of nieces, nephews, cousins and other relatives and friends.
She attended Sunday school and church every Sunday at Greater St. Stephen Full Gospel. One of the highlights of her membership at the church was her visit to Jerusalem and the Holy Land.
Granny, as she was affectionately known by her grandchildren and their friends, loved them all.
Visitation will be held Friday, May 23, from 2 p.m. until 6 p.m. at Crain and Sons Funeral Home in Franklinton and Saturday, May 24, from 9 a.m. until 10 a.m., with the funeral service to follow, at Greater St. Stephens Full Gospel Baptist Church in New Orleans, with Dr. Debra B. Morton officiating. Interment will be held in the Mt. Olive Cemetery in Mt. Hermon.
Please sign the guestbook at www.crainandsons.com.