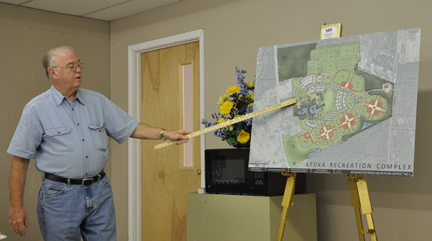 A proposed millage to fund the planned Atoka Recreation Complex was pulled off the May 3 ballot following significant resistance to the measure, and the Recreation District board formed the citizens group as a way to get ideas and input to help the project move forward.

Vice Chairman Dennie Fowler gave an overview of the features included in the master plan for the 115-acre complex, located 2.2 miles from the Washington Parish Fairgrounds on Louisiana Highway 25. He said the goal is to provide a quality facility that can be used by people of all ages.

He encouraged people to get involved with the citizens group meetings and introduced Justin Brown, who has been appointed chairman of the group.

Discussing the importance of recreation, Brown said his intention with the group is to bring people together.

The first meeting will be held Wednesday at 7 p.m. at the 10-10 Club in Franklinton.

Brown said it will include background information on the Recreation District and complex, a question and answer session, a detailed presentation on the economic end of the project including alternative funding sources, and an opportunity for people to present ideas.

Research teams will be formed to gather further information on different ideas, and Brown said those individuals will report back to the group.

The group will make its presentation to the Recreation District board at a later date, and the project will move forward from there, Brown said.

He encouraged people to attend and offer their thoughts and ideas. Everyone’s voice is important, he said.

He said he would like to see a large turnout and as much of the district represented as possible.꜀