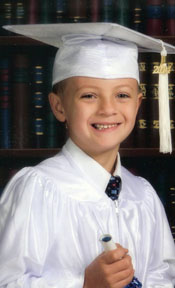 The moment Ashton entered this world, he gave new meaning to life for his Daddy. Ashton was a child filled with joy and curiosity. He was loved by everyone he met, but especially by his family. Ashton and his Daddy, Michael, shared an undying love for one another. They expressed their love every single day.

Ashton also loved Baby Alex, his younger brother, and his older brother, Anderson. Ashton was the best big brother anyone could ask for. He would always make sure Baby Alex was taken care of and knew everything about life that he knew. Ashton was a ray of sunshine in everyone’s life. His smile would brighten the darkest day.

His classmates at Ben’s Ford Christian School loved Ashton as well. He made everyone, especially his Daddy, so proud of all of his scholastic accomplishments. Ashton also loved going to church and learning his Bible verses. He would often recite Bible verses at church. Ashton’s proudest moment was looking forward to his upcoming kindergarten graduation ceremony. He was also happy to be entering the first grade in the fall.

Ashton had been sharpening his basketball skills, while also teaching Baby Alex how to dribble the ball with both hands. Ashton had a lifetime of things to achieve. Ashton’s Daddy could not be more proud of his beloved son.

Ashton, Baby Alex and their daddy (Mike) were thrilled to be able to spend time together. They always made the most of every moment. Ashton also loved going on boat rides, playing in the yard with his trucks, drawing beautiful pictures and just being a kid. Ashton was a very strong-willed boy and lived life to its fullest with the people who loved him.

Ashton has greatly impressed beautiful, lasting memories in the hearts of all who were blessed to know him. He will be forever loved and celebrated by beloved family and dear friends. He will be greatly missed.

Visitation will begin Friday, April 25, from 5 p.m. until service time at 2 p.m. on Saturday at First Pentecostal Church, 11532 Louisiana Highway 21 S. in Bogalusa. The Rev. Travis Houston and Pastor Caleb Martin will officiate. Interment will follow at Ponemah Cemetery.

Poole-Ritchie Funeral Home is in charge of arrangements.