Springtime is bursting out all over at the Bogalusa Senior Center 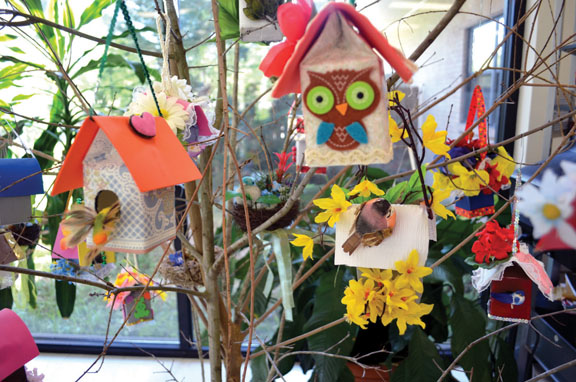 The Bogalusa Senior Center is located on Willis Avenue just off of Cassidy Park, and the building designers took advantage of the near proximity to the lush natural acreage by installing full-length windows almost three-quarters of the way around the big activity room.

While they eat lunch, make crafts or even exercise, the elders of the community are able to relax in the serene environment. Hawks have been spotted resting on a fence post that separates the spaces, and for a while last year a small flock of inquisitive turkeys would come by looking for food, often craning their necks to peer inside at the delighted seniors who were peering out.

The windows take on a special allure in the springtime, but so does the space behind the glass. In honor of the season, a decorated Easter Tree now stands in one corner, colored pictures of Easter bunnies grace the glass, and a Birdhouse Tree adds vibrant color across the room.

Site Manager Shirley Cooper said many of the people for whom the center is a community gathering spot and lifeline love to make crafts. The Birdhouse Tree provides evidence that there’s still a lot of talent waiting to be channeled through the senior citizens.

All participants started out with a small empty milk carton and then added whatever decorations he or she desired. Some glued on fabric and lace, while others painted designs or attached Mardi Gras beads. There were tiny birds and perches, wee straw hats, animal and other figures cut out of felt, hearts, bows, eggs and lots of flowers.

Some people fashioned nests in which they placed various types of birds atop clutches of colorful eggs.

The anonymous judge reportedly had a very difficult time choosing from among the many beautiful or adorable houses, but ultimately four of them were picked for special recognition.

Cooper’s purple and white lace house won the designation of Most Beautiful, but she declared herself ineligible and shared the honor with Hazel Lewis who’d created a similar effect in pink, white and baby blue.

Bobbie Varnado’s rendition, which included pasted on photographs of small birds plus curled, colorful ribbons, was named Most Creative. And Mary Distefano’s green-roofed house featuring a leprechaun, shamrocks and a pot of gold, was named the Most Unusual.

Cooper said the houses will be offered for sale as decorations, and the proceeds will go back into the center’s Craft Fund.