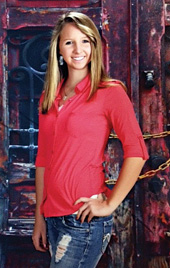 Laiton Jenkins of Franklinton was selected to participate in the 2014 Miss Teen Baton Rouge/ Lafayette pageant competition which took place March 23, with the winner to represent Baton Rouge/Lafayette at the national competition in Orlando, Fla. Contestants competed in modeling routines which included casual wear and formal wear, and were also able to display their personality and interviewing skills. Personality is the number one aspect that each contestant is judged on during ail phases of competition.