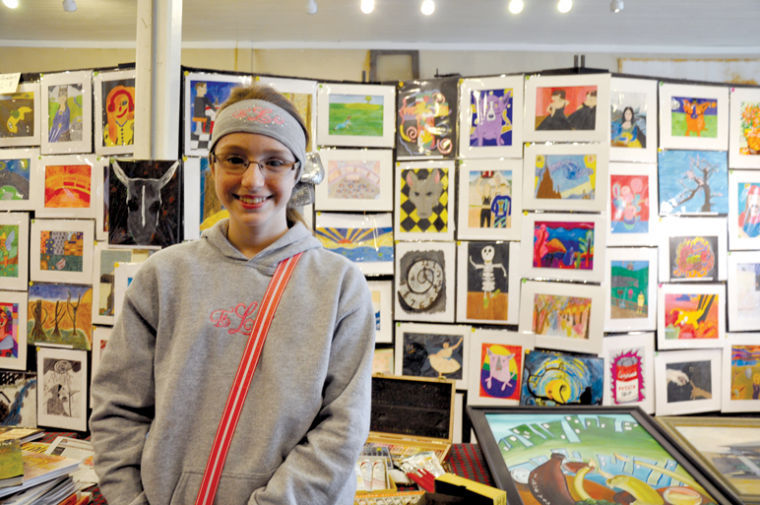 The Varnado Store Museum is giving young artists a chance to show off their work this month through its Washington Parish Student Art Exhibit.

The show, held for the second year at the Franklinton museum, was unveiled, April 4 with an open house attended by students, parents and local art teachers.

For this year’s show, students were asked to find a piece of art that inspires them and make it their own, recreating the original rather than copying it.

Since the exhibit opened, students with work in the show and their families have been stopping by to get a look at the art.

Among the visitors Saturday were 12-year-old Emma Loyd, a sixth-grader at Franklinton Junior High, and her family.

She said it was exciting to see her artwork on display in the museum.

“I think it’s pretty cool to have people recognize what you do,” she said.

The competition was open to all Washington Parish students — public, private and home school.

Museum Director Terry Seal said there was a good response, with more than 230 pieces submitted. She expressed her appreciation to the art teachers and schools for their cooperation.

All pieces are currently up at the museum and are divided into three categories: grades one to five, grades six to eight and grades nine to 12.

The work will be evaluated by an out-of-town judge later this month, and a first-, second- and third-place winner will be named in each category. Winners will receive monetary prizes, and the first-place winner in each category will bring a $100 prize back to his or her school’s art program.

Throughout the month of April, museum visitors will have the opportunity to vote on their favorite piece, with one vote allowed per visit. The entry with the most votes will be named Best of Show.

All winners will be announced and prizes will be given out during the museum’s Spring Street Fair, on Saturday, April 26.

Seal said the museum holds the show to provide an outlet for local students’ creative expression.

“Washington Parish has a wonderful talent among its students. We should foster it and have more opportunities for the children to show their work to the public,” she said.

The artwork can be viewed at the museum, located at 936 Pearl St. in Franklinton.