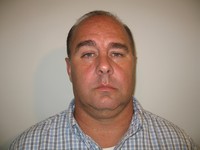 A few days prior to the arrest, the Sheriff’s Office received information that Magee, a resident of Conway, Ark., would be in the parish during the weekend. Magee, who owes thousands in back child support in Washington Parish, was located sitting on a patio at the rear of a residence on Louisiana Highway 430 with several other people.

When deputies approached and advised him he was under arrest, he became angry and hostile and declared that he was not going to jail.

Detective Corbet Hunt asked Magee to walk with the deputies to another area so that they could discuss the situation outside the presence of the others who were being very vocal and disruptive.

Magee pulled away from Hunt and began walking to the rear door of the residence. He was given verbal orders to stop, but refused to comply. He continued to walk away from the officers who feared that he might have access to weapons if he went inside.

Magee was warned that a Taser would be deployed unless he complied. He continued to walk away and entered the back door of the residence. The Taser was deployed.

Magee continued to resist and complied only after the Taser was deployed a second time. He was then arrested and transported to the Washington Parish Jail.

He remains in jail, charged with criminal neglect of family and four counts of failure to pay a child support obligation of $39,178.56.

“Last year, your Sheriff’s Office conducted the largest dead-beat parent roundup in the history of the 22nd Judicial District, resulting in thousands of dollars going to dependent children in our parish,” Sheriff Randy Seal said.

“Dead-beat parents need to understand that our pursuit of them is not limited to roundups. We are looking for them all the time and will arrest them when we find them. It is unconscionable that any biological parent will wantonly fail to provide adequate support for their children.”