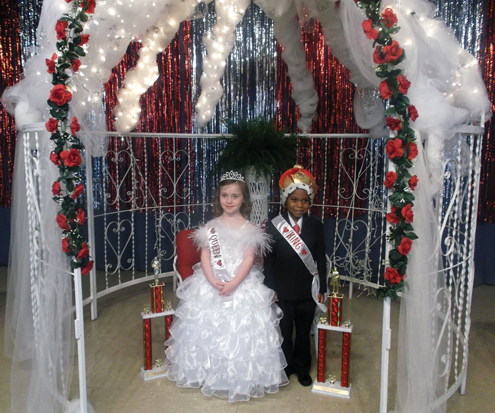 Denhamtown held its annual Valentine Extravaganza on Friday, Feb. 14, in the school’s auditorium, the culmination of Denhamtown’s main fundraiser for the school year. Students sell raffle tickets and everyone who sells 100 or more tickets becomes a prince or princess for the evening, with the top selling boy and girl crowned king and queen.

The 2014 royalty were crowned by the Ammonte’ Keys and Malia Morris, the 2013 king and queen.

This year’s king is Jace Bickham, the son of Omika Johnson and Aaron Bickham. The queen is Presley Flynn, daughter of Jimmy and Chrissy Flynn.

Runners-up were all princes and princesses. The first runners-up, were Ja’Kyori Varnado and Jadyn Godbolt.

Amond Mingo and Rheagan Douglas were second runners-up, and third runners up were Josiah Applewhite and Rayleigh Forbes.

The flower girl, Aunya Mingo, showered the runway with flowers, preparing for the king and queen’s entrance.

The royals and their court were serenaded with a solo by Jhammarick Campbell, and the program followed.

After the program and prizes awarded, students and their families moved to the reception area for refreshments.

The winner of the $100 raffle was Michael O’Ree.