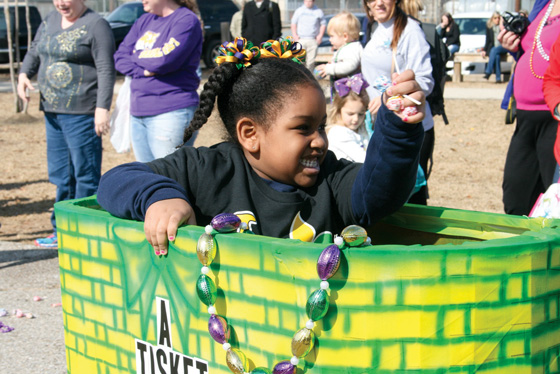 Bogalusa’s first Mardi Gras parade of the season rolled through Goodyear Park Friday when Annunciation Catholic School’s Krewe of Mother Goose delighted young and older alike with their whimsical floats, colorful costumes and their generosity when throwing candy, beads and stuffed animals to everyone who lifted their arms. The weather could not have been better, sunny and almost warm, but not cold.

As the floats lined up, the MCCA royals, who led the parade on foot, were announced: MCCA XXXIV King Russell Lambert and MCCA XXXIV Charmaine Reeves.

Then it was time for 16 floats and a myriad of parade walkers following the king and queen of MCCA.

The first float, pulled by Drew Wagner, introduced Robin Hood, portrayed by Austin Clark. Next was A Tisket, A Tasket, ridden by Jonayah Bullard and pulled by Lamesha Holloway. Jack and Jill Owen Mitchell and Olivia Palmer followed, with MacKenzie Cefalu and Justin Stewart pulling them. Hey, Diddle Diddle was next, with Jaxon Schultz and Benny Strahan aboard. Randall Foster and Jacob Campos pulled.

Bye Baby Bunting featured Cameron Nicholson and was pulled by James Stevenson. Ava Pierce and Wyatt Watson were the King and Queen of Hearts. Katelyn Singley and Christian Holloway pulled them. The Boy in the Barn, Rayden Rayborn, was pulled by Joseph Ezell.

Halley Stewart was the Old Woman in the Shoe, and she had Vania Aguilar and Molly Seal pulling her float.

Aiden Hartzog and Peyton Hartzog were the riders in the Peter, Peter Pumpkin Eater float, which was pulled by Connor Gibson and Blake Loper. Keagan Saucier portrayed Old McDonald on his farm, pulled by Raven Foster.

Jack be Nimble was Heath Blanchard’s float, and he had Jackson Miley pulling him.

Jack and Jill, Eli Young and Judy Wong, rode round and round and never got up the hill. They were pulled by Jeane Wong and Seth Penny.

Finn Todd as the Muffin Man. McKenna Fussel and Marion Scott pulled him.

Kate Pounds was the Queen of Hearts, pulled by Katelyn Gray and Ashtyn Terrell. Pulled by Josh Gulczynski and Trenity Sullivan, Brayden Sumrall and Olivia Caldwell enjoyed their ride as Hansel and Gretel.

The final float, Hickory, Dickory Dock, was manned by Ben Villarubia and pulled by Kade Day and Colton Temples.