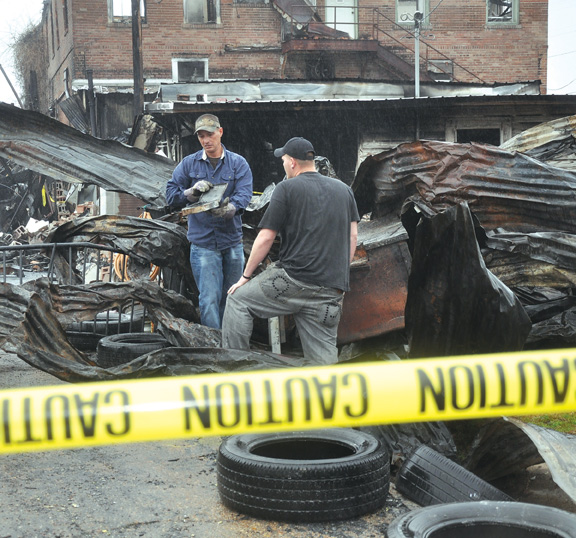 Daniel Ducote could be seen digging through the rubble at Economy Tire Monday morning, hoping he would somehow find his petty cash box intact inside his burned desk.

It wasn’t to be. All that remained in the box was soot-covered change and black ash.

This week, Ducote and other Bogalusa business owners affected by a raging Saturday morning fire are assessing their damages and trying to decide how move forward.

It was early Saturday, around 7 a.m., when a fire broke out in a city block between Georgia and Alabama avenues and Memphis Street.

Firefighters from Bogalusa as well as Washington Parish Fire Districts 6 and 7, along with volunteers, worked for hours to put out the massive fire. The fire’s cause is still being investigated.

Ducote was driving in to work from Abita Springs about 7:30 a.m. Saturday, still miles out of town when he saw the smoke plume. He said he knew what it was right away.

A native of the Mt. Hermon area, he had been at his location in Bogalusa about a year. He said he’s leaning on his faith in the aftermath of the fire.

Ducote said he thinks he’ll be able to salvage the dunk tank where he checks his tires, as well as about 100 tires that were under some tin. Most other things are gone, including a floor jack he’d bought the day before the fire and only used twice.

Eric Barber went in early Saturday morning to get his business, Barber’s Auto and Paint Supply Co., ready for the day. He opens at 8 a.m. on Saturdays, but he went in much earlier. He turned on the lights and took a look at the parts that had been delivered, then he went to run some errands and was eating breakfast at Yo-Yo’s on Superior Avenue when he learned about the fire.

Nothing in his store was salvageable. He said he is waiting on the insurance company to complete its process, then he will decide if he will be able to stay in business.

After working at Magee Financial in Bogalusa almost 10 years, Barber took the plunge as a first-time business owner when he opened his store March 26, 2013.

He said an overwhelming number of people, including customers, family members and friends, have offered to help following the fire. He said he’s thankful for that and grateful to Floyd Burdeaux, the owner of the building, who helped him get his business started.

Barber, a Franklinton resident and member of First Baptist Church in Franklinton, said his church family has been helpful and uplifting as well.

Busby Family Karate owner Stacey Busby was not able to save much from his business except for a few momentos located on the bottom floor. The fire was most destructive at the top floor of his two-story building that used to house Landry’s restaurant.

He had classes scheduled for early that morning and was getting ready to go to the studio when his son-in-law called to tell him Economy Tire was blazing.

Busby arrived about 7:30 a.m., and it was not long after that the fire had spread to his building. He said he sent out a notice through Facebook that 8 a.m. classes would be canceled that day, and he is now in the process of trying to find another location to hold classes.

Adams & Associates owner Jim Adams said he got the call about the fire Saturday about 7 a.m. when a friend passing by saw flames at an adjoining business. Adams arrived about 7:20 and saw a massive fire in progress.

With the exception of some photos and computers, little from his building was saved.

Adams said he lost all of his technical equipment to the fire, but, thankfully, much of the larger equipment was out on job sites and was unharmed.

The business, which will reach its 50th anniversary June 6, had been at its Memphis Street location since 1985.

“Bogalusa has been good to us. We’ve had a wonderful business here for many, many years,” he said, adding there has been a great outpouring of community support following the fire.

In the past few years Adams had finally replenished his inventory to pre-Katrina levels. That hurricane blew the roof off the building, and all the equipment was lost at that time due to water damage, he said.

On Monday, Adams said the company was in the process of setting up a temporary office in his guesthouse, with the intention of getting back to work the next day. The electrical and mechanical contractor said there are a number of jobs still in progress.

Troy Carney, owner of Carney’s Exhaust Specialist on Alabama Avenue, said he and members of his staff were at the scene a little after 7 a.m. Saturday after hearing about the fire.

He said they went in through the back door, hoping to save what they could. When they got to the bay area, they noticed an inside wall was on fire.

They opened the bay door and saw a fire hose lying on the ground. Carney said the hose was too short to be reached by the firefighters fighting the blaze at the nearby tire shop.

Quick action by Manager Anthony Mitchell helped keep the fire from spreading further. Carney said Mitchell got the hose to come on after several tries and was able to extinguish the fire on the wall of his building.

Carney said that fire “would have engulfed the whole building if we didn’t get it out.”

With things like tires and oil drums on each side, he said doesn’t know how his building was spared.

“It’s just a miracle that, in an L-shaped form, everything burned around us, and we’re still here,” he said, adding that he received a number of calls during the weekend from people checking on him and the business.

Carney, who has been at his location about one year, said the business will need a new door, but he plans to leave the burned wall like it is as a reminder.

Reflecting on the experience Monday, Carney said the fire’s toll was not as extensive as it could have been.

“It could have been in the middle of the day with everybody working,” he said.