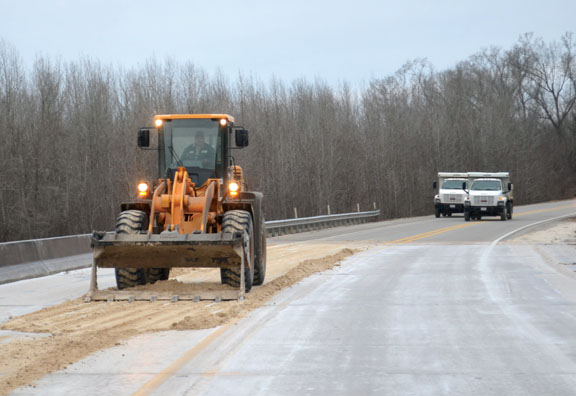 City and parish offices, schools and many businesses remained closed due to icy conditions Wednesday after a mixture of sleet and snow fell throughout the parish before temperatures dropped into the low 20s overnight Tuesday.

Temperatures were expected to rise slightly Wednesday but fall back into the upper teens overnight, refreezing any moisture that remained on the roads.

And while most of Washington Parish was hunkered down at home riding out the winter weather, Bog alusa and Washington Parish Public Works crews worked through the day, through the night and into the morning making sure bridges throughout the city, parish and even into Mississippi were safe for anyone who had to drive. As of Wednesday morning, there was no end in sight.

Bogalusa Director of Public Works James Hall said his crews had all the bridges in the city sanded and by Tuesday afternoon.

The full crew was sent out to begin work on sanding the parish’s 145 bridges Monday, as soon as the winter storm watch was issued. Employees were also sanding bridges as needed on Tuesday, and resanding some areas that had been treated last week during that ice storm.

Tuesday afternoon the parish got authorization from the state Department of Transportation and Development to sand some state roads and bridges, and the Bogalusa crews were called to help.

For the next five and a half hours the crews spread sand all over the parish.

When the Bogalusa workers finally got back to town it wasn’t long before Police Chief Joe Culpepper called to report ice over the asphalt on Shriner’s Drive. And about 10:30 p.m., the Columbia Street intersection was reported frozen, and an hour later, city bridges were added to the list.

“We had to cut the ice off and re-sand,” Hall said early Wednesday morning. “Now we’re starting all over again. We need to get our bridges done again in case the parish calls, and we have to go back to those.”

The Columbia Street bridge was the only one that had to be closed to traffic, Hall said. It remained closed Wednesday morning.

Crews worked through the night in below freezing temperatures with steady winds of 35 miles per hour. Jeff Boone, who was running a crew, said he’d seen ice, sleet and a few flakes of snow.

About 7:30 a.m. Wednesday, Boone’s crew, which included three dump trucks loaded with sand and a frontend loader, was preparing to re-sand the bridge on Louisiana Highway 21 when it was called to the “second bridge in Mississippi” over the Pearl River.

In the middle of that run Boone was informed that the Mississippi DOTD was iced in, so his crew would have to sand all the way to Crossroads. The bridges were slick, and even Boone’s big work truck, which he was driving at a very slow speed, was sliding occasionally on the ice.

And because the sand in the dump trucks had been sleeted on, it was frozen in place and had to be broken up before it could be dumped onto the streets. Often, the frontend loader operator had to use his claw to open the gate to enable the sand to slide through.

While there was some traffic Wednesday morning, Hall praised the public for heeding advice to stay off the roads unless necessary.

On Wednesday morning, he said he’d heard of only four motor vehicle accidents throughout the parish on Tuesday.

“All were single vehicle wrecks,” he said. “Three went off into the ditch, and one went off the side of the road and rolled over. Nobody was injured in any of them.”

Lucchesi said his crews have closely monitored the Sheriff’s Office radio and other emergency radio frequencies to stay on top of any problem areas. They also sanded areas with the potential to see high activity during the storm, such as hospital and police department parking lots.

Parish workers were in the same mode Wednesday, he said, and he, too, credited residents for staying off the roadways.

“We appreciate their cooperation,” he said.

After its briefing with the National Weather Service Wednesday morning, the parish’s Office of Emergency Preparedness reported that the hard freeze warning would continue until 9 a.m. Thursday, and that overnight temperatures were expected to fall into the mid teens and to remain below freezing for another 14 to 18 hours.

Residents were again urged to stay off the roadways, and to drive with caution if they must travel.