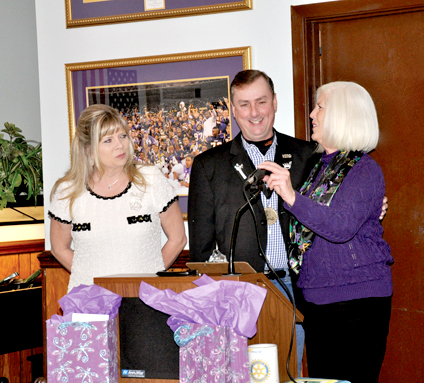 Members of the Franklinton Rotary Club had some royal visitors during their meeting Thursday, MCCA XXXIV King Russell Lambert and Queen Charmaine Reeves.

The MCCA royals were introduced by Rotarian and MCCA krewe member Linda Jenkins.

Lambert began by thanking the club for inviting them to the luncheon.

He said he is the owner of Russell Lambert Construction Co., which does industrial maintenance work in paper mills and power plants throughout the U.S. and parts of Canada.

The lifelong Bogalusa resident is the son of Janice Stewart Lambert and George Preston Lambert and is a graduate of Bogalusa High School and Louisiana Technical College.

Lambert said he is looking forward to a great season and parade day. He said he is hoping for good weather and that everyone will enjoy the festivities.

“We really have had a great time this year so far and look for many, many more great times,” he said.

Reeves was born and raised in Bogalusa and is a Bogalusa High graduate.

She received a bachelor’s degree from Southeastern and taught for six years in the Bogalusa City School System.

She is currently a curriculum coach at Central Elementary and is working on a master’s degree in educational leadership, while in the midst of her MCCA reign.

Reeves has been married for 24 years to Bogalusa High graduate Darren Reeves and is the daughter of Sandra Burton and Charles Ingram.

The season has been an enjoyable one filled with memorable experiences, starting with the announcement party, Reeves said. The event featured a nod to the reality show “The Bachelor,” with Lambert presenting his queen with a rose to announce her selection.

“I want to start by thanking Russell for giving me that rose,” she said. “‘The Bachelor’ is one of my favorite shows, so to get the final rose was very exciting.”

The theme this season is “Reality TV on Parade.” Reeves said she’s a big fan of reality shows and knows almost all of them.

She said more exciting things are in store in months leading up to the parade, which will roll Saturday, March 1 in Bogalusa.

“I hope to see you all at some of the parties and especially at the parade,” she said.