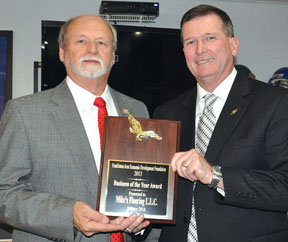 A business of the year was named and new board members for several economic organizations were installed during a banquet held Monday in Pine.

Board member Coylean Schloegel said FAEDF chooses a business that has impacted the Franklinton area each year and announced that this year’s Business of the Year is Mike’s Flooring.

Owner Mike Parkerson offered remarks about the business, which currently has 59 employees and has been in operation since 2003. He said he enjoys serving the community and appreciates being selected Business of the Year.

“It’s quite an honor, and I hope I can continue to thrive,” he said.

Following business, including the approval of minutes from last year’s meeting and the presentation of financial statements, speaker Dr. John Crain, president of Southeastern Louisiana University, discussed some of the college’s projects and programs.

FAEDF and WEDF Executive Director Ryan Seal reported that it was a great year for economic development statewide, with more than $26 billion worth of projects announced and Louisiana having the opportunity and potential to put more than 27,000 people to work with the capital investments.

The parish also had a banner year, highlighted by General Dynamics Information Technology locating a call center in the Bogalusa Industrial Park and creating more than 600 jobs, Seal said.

There was also great activity in the Franklinton Industrial Park. Seal said the Acme Machine project came alive in 2013, and the park’s first tenant, Grand Isle Shipyard, is up to 62 employees and has the opportunity to expand its structure.

Diamond Painting and Sandblasting has purchased two lots and plans to move its corporate headquarters into the Franklinton Industrial Park, and the Louisiana National Guard is building a Readiness Center, Seal said.

Over in the Bogalusa Industrial Park, plans are in place to move the Salvage Store’s corporate headquarters and distribution center into a bigger building. Seal said the company is looking to add about 15-20 employees.

Additionally, International Paper is planning to occupy warehouse space in the park within about a month.

Seal also said a building was leased to Parkway Pipeline on a short-term basis during 2013, with the space used as a laydown yard.

Major retail expansions last year included the opening of a Walmart Supercenter in Bogalusa, along with other stores, including Rue 21 and Dollar Tree.

“I think we’ve had a really good year in economic development,” Seal said. “I’m proud of not only the large projects but the small ones as well.”

He said he is in negotiation on a couple of other projects, and he thinks 2014 will be another good year.

Reports were presented by each organization’s president. Board members for each group were installed by Judge William Burris.