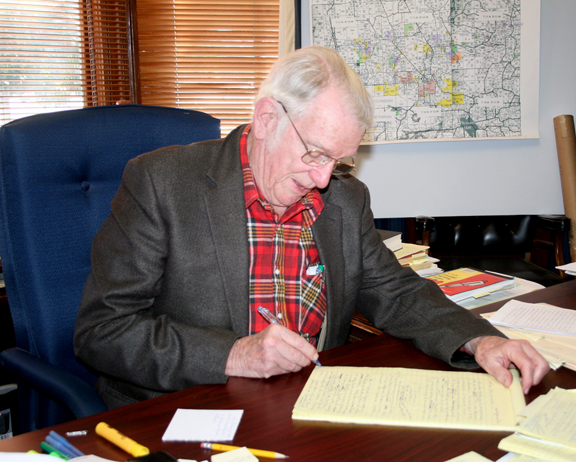 Talking with John Gallaspy is like talking with someone from another era, a time when words were important, civility was the norm and life was lived in a much more genteel and relaxed manner than it is today.

He’s well known in Bogalusa and Washington Parish as an attorney and community activist. But after 55 years of practicing law he’s recently retired, and now he’s writing a book on Bogalusa.

Gallaspy was born and reared in DeSoto Parish, some 40 miles south of Shreveport. He left his small-town life in the early 1950s when he joined the Army and was shipped to Korea, part of an artillery unit attached to the 3rd Infantry Division. He remained there until the war ended in July 1953.

Ready to get on with his life and armed with his GI Bill, he enrolled at LSU to pursue a law degree, which was conferred in February 1958. Later that year, on June 6, he and Dixie Yates, a captivating southern belle from Washington Parish, eloped. Gallaspy immediately hung up his shingle and began practicing law.

John and Dixie became parents in December 1959 when their eldest son, Whit, was born. Gardner was next, in 1963, and in 1966 the last Gallaspy son, Leland, was born.

The Gallaspys moved to Bogalusa in 1961. He built his law practice and became involved in his community. He was a member of the Milltown Players for years, was once quite active in MCCA and has served on the boards of a number of charitable and non-profit organizations.

Recently, Gallaspy has involved himself with a project important enough to him that his law practice had to take a back seat.

He began in earnest to research and write a book about Bogalusa and Washington Parish — its land, its industry and its people, and he wanted to complete it and have it published by the time Bogalusa’s Centennial celebration rolls around in July. He knew he couldn’t finish the book on time and also keep working.

He and Anita Lavinghouse his secretary, assistant, chauffer and friend, still go to the office most every day to tie up the numerous loose ends you might expect to find after 55 years. But for the most part he works on his book.

Gallaspy got the idea for the book while going through some old land records at the courthouse. He was fascinated, and that interest lingered.

“I wanted to write something that would convey some sense of the personality of a community, which may have been rather unusual, to say the least,” he said.

Gallaspy’s book will include stories of people, like the Poitevent family from New Orleans who built houses in what they named Bogalusa Terrace, and iconic places like the old Pine Tree Inn.

“I remember it. They tore it down in 1962, and when I came here in 1961 the Rotary was meeting there. I joined (the Rotary Club), and we had some wonderful times there. We met in the basement. The huge chandelier was on the first floor in the great dining hall, and you could just visualize Col. (W.H.) Sullivan standing there toasting some visiting beauty,” he said.

Gallaspy also plans a chapter on Sullivan’s extremely costly and extravagant wedding in 1922 to his second wife, Ella Rose Salmen, of Slidell. His first wife, Elizabeth Fitzrandolph Sullivan, had died in 1918.

And the history of Bogalusa couldn’t even be written without including the Great Southern Lumber Co. and the New Orleans Great Northern Railroad, built by the Goodyears primarily to haul lumber, first to the sawmill, a small mill built just to cut the timbers to build the “big mill,” and then later to move the finished product to market.

“One thing I can’t figure out is how they built it that quickly,” he said.

It was being surveyed in 1905, and they apparently began to work on it soon after, because they had it up and running to bring in heavy materials (for building the “big” mill) by mid-1906, he said.

Once the railroad was operational, the Great Southern Lumber Co. sawmill went up rather quickly and was ready to go in October 1907. But before they could get started marketing their product a run on the Knickerbocker Trust Co. bank in New York occurred, which set off what historians dubbed the Bank Panic of ’07.

“The board of directors decided there was no point in opening it because there was no market then for timbers,” he said. “The bank panic had created what we now call a depression. The mill, and many of the company houses which had just been built, sat dormant for almost a year waiting for the economy to recover.

“Can you imagine the stress that put on men who had just invested their fortune in a town that was now a ghost town?”

In the months since he began the project, Gallaspy has filled dozens of yellow legal pads with his cramped, almost-Spenserian script.

“I’m not a computer person,” he said.

The book (working title, “Bogalusa: The First 100 Years) should prove to be an interesting read for local residents, or anyone interested in the history of Washington Parish.

“My theory is that there’s no point in putting a book together unless it is used by someone,” he said, adding, “People are more likely to read a book if it is readable.”