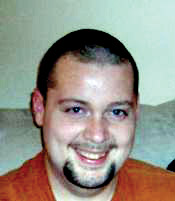 He was born at on Jan. 11, 1984, at Fort Knox, Ky., the son of J.L. Woods and Susan Francisco. He attended Madison Southern High School in Berea, Ky., and graduated in 2002. He later moved to Fontana, Calif., and attended Le Cordon Bleu College for Culinary Arts in Pasadena, Calif. Joshua then moved to Bogalusa, where he started his own food service business called “Woodies,” which he ran with his fiancée, Amanda. He enjoyed cooking, watching the food network and spending time with his children.

Friends may call for visitation on Friday, Jan. 24 at Dwayne Walker Funeral Home in Hyden, Ky., from 5-9 p.m.

The funeral service will be conducted on Saturday at 11 a.m. in the funeral home chapel, with Pastor Merle Caudill officiating. Interment will follow in the Keen-Woods Cemetery in Hyden.