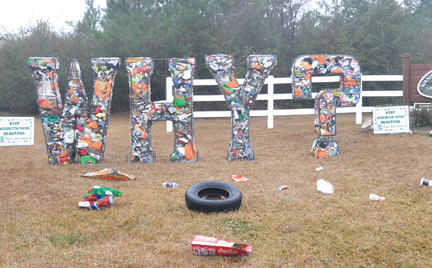 The last Litter Letter word was installed last week at Choctaw Landfill, capping off a project that has sought to promote awareness of litter throughout Washington Parish.

The word WHY went up Thursday at the landfill. Previous words, installed in various locations in the parish, have included PRIDE, THINK and RESPECT.

A project of Keep Washington Parish Beautiful, the Litter Letters were funded through a $3,000 grant from Keep Louisiana Beautiful.

The parish organization’s future plans call for moving the existing words to different communities in the outlying parts of the parish, Chairman Troy Barber said.

Barber expresses his appreciation to all who have participated in this project, which began about a year ago. The idea behind the project is to educate the public and raise awareness, he added.

“We want to take pride in our community, keep it clean and make it a better place to live,” he said.