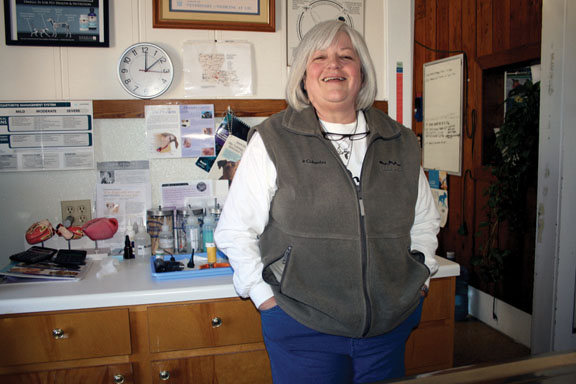 “While I really enjoy teaching, I find it very frustrating.”

That’s probably the only negative thing Dr. Elizabeth “Liz” Penton has to say about the latest career path she has taken since she left high school.

Penton is well known in Bogalusa. Her Animal Clinic, located on Louisiana Highway 10 near the National Guard Armory, is the place many residents take their pets for vaccinations, grooming and illness or just to stay awhile when their owners go out of town for a few days. She is known for her good humor with ornery animals, and people, for that matter. She’ll tell you the truth, with no sugar coating, and not necessarily what you’d like to hear.

But Penton has many facets. Not content with being just a veterinarian, she looks for ways to feed her mind and keep her brain sharp. She’s a firm believer in the “if you don’t use it you lose it” school of thought.

Penton has been required to complete at least 20 hours of continuing education every year since graduating from LSU’s veterinary school in 1994.

And it doesn’t have to be something related to her field, she added, although she said she wouldn’t take a class on something she would never use.

“But you have to stay current or you’re a dinosaur,” she said, laughing.

Penton has recently found another way to keep her mind sharp. For the past couple of years she has taught biology for non-science majors at Northshore Technical Community College.

“I really enjoy that,” she said. “I’ve done it for three semesters, but I’m off this semester. It’s really a challenge. I had to make this interesting for people who could care less about science.”

She has also developed an interest in theology.

“It’s just a body of knowledge that has absolutely nothing to do with science but it’s just intriguing,” she said. “Your eyes are opened so much more than they ever were.”

She’s hoping that one day — “if it’s God’s will” — she can take some courses at Notre Dame Seminary in New Orleans.

Penton spent most of her childhood in mid city New Orleans. A child of the 1950s, she was the only child of older parents, who were both in their 40s when she was born. Her dad owned and operated a gun shop, where he re-blued, chrome-plated and repaired weapons for everyone from police officers to the average hunter. Her mom, who died when Penton was 12, worked in the store with him.

Her parents, the Warners, were by no means rich, but Penton said they always had a camp where they spent weekends.

Penton’s education was entrusted to private schools — Sacred Heart, St. Rose de Lima and St. Joseph Academy — until the family moved to the camp full-time at the beginning of her junior year. She enrolled in Slidell High School, where she graduated in 1970.

She moved back to New Orleans for a year, then her father persuaded her to return to Slidell. A few years later she and Carl Rudolph Penton “just stumbled into each other,” Penton said. Although they had common friends, they ran in different circles. But in 1973 something clicked, and after dating about a month they were married. They celebrated their 40th anniversary in 2013.

The couple had their first daughter, Carey, in 1974, and their second, Tammy, in 1977. Rudy had his own electrical business and Liz worked off and on.

Eventually the Pentons bought a 100-year-old home on five acres in Abita Springs and spent the next 15 years restoring the home and the surrounding acreage and raising their girls.

At the same time Penton was learning the finer points of renovation in Abita Springs, she was also working as a researcher at Tulane University’s Primate Center in Covington. In 1985 she began taking college biology classes taught off campus by Southeastern. Soon she was going to college full time.

She earned her undergraduate degree in zoology from Southeastern, graduating in December 1989. She worked for several veterinarians in the Mandeville area whenever she had time off from school, all the while thinking about going to veterinary school herself.

But she thought she was too old. However, after talking with some doctors at the Primate Center who were visiting from LSU’s vet school, she was encouraged to apply.

To that end she looked into buying the business she had been working at since graduation. She showed the doctor how much she had improved his income since she joined the staff, but he declined to sell and wouldn’t give her a raise, either.

Then a friend told her about a practice up for sale in Bogalusa.

“And I thought — Bogalusa. You’ve got to be kidding me,” she said, laughing.

But she went to see the place anyway, and she liked what she saw. So she went back a second time to take a look at the books.

The deal was done in February 1995. The Animal Clinic had a new owner.

She commuted for six months, but the family soon found two houses on 35 acres near the clinic, bought the property and immediately began to renovate.

The building housing the clinic was small, but adequate, Penton said, and the business thrived.

In 2001 an old home located on property now occupied by CVS was offered to her for purchase. She declined, but later she was given the house on the condition she move it from its current location within six months and leave the lot clean after the move.

Penton accepted, they went to work taking the house apart, and three months later the house was ready to move. Once it was moved and in place, they began putting it back together.

The house became her new clinic, and the original clinic became a boarding facility.

Penton said while she enjoys caring for animals, a veterinarian’s primary duty is to protect the public from zoonotic disease, which are contagious diseases, spread between animals and humans, such as Lyme disease, anthrax, e coli, malaria and Rocky Mountain spotted fever, to name a few.

To that end, her love of science remains important, as well as her unending thirst for knowledge.

Parent, veterinarian, renovator, teacher… Penton is all of those things. Hers has been a life well lived, but there’s undoubtedly more to come.

“I’m not done yet,” she said, chuckling.