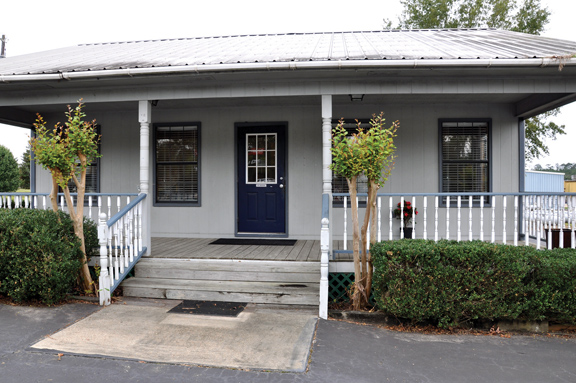 The Washington Parish Tourism Commission has a new, larger home in Franklinton, something that should help with getting information out on what the parish has to offer.

There are many benefits in being at the new office, located at 1950 Washington St., Manager Kathy Mayor said.

Mayor said the commission was at its previous office at 908 Mill St. for more than 15 years. It was very small and crowded, and she said she “never could turn it into a true visitors center.” When she started with the commission 10 years ago, one of the first things she got to work on was looking at other properties.

The Washington Street spot, formerly a Mack Grubbs used car dealership, was eyed, but it went on to become a Dairy Farmers of America office. Mayor said the commission kept up the search, while waiting for that location to become available.

At the old location, parking was a big issue. Mayor said the commission was situated between an insurance office and a barbershop, and the street was always noisy and busy.

“If somebody came in a motor home, they had to try to park across the street or at the convenience store behind us and walk through,” she said. “Now that’s not a problem. We have plenty of parking.”

She said it is overall a better location. The office will be able to provide better customer service, and she said she the extra space will make it possible to display more brochures and make more information available to people.

The move took place the first of this month. Mayor said she’d just been working on that a couple of weeks when the time came to relocate to the fairgrounds for four days, as the commission has an informational table in the old Armory building during the fair.

Mayor said there was a good response at the table, and the topic she was asked about most often was the Louisiana Northshore Quilt Trail. The first quilt trail in the state, it covers a five-parish area that includes Washington, St. Tammany, Tangipahoa, Livingston and St. Helena.

There are about half a dozen quilt blocks in Franklinton and three in Bogalusa, and Mayor said one will be unveiled next month in Mt. Hermon. The Tourism Commission has a block, and she said it will be moved from the old office, cleaned and rehung.

People passing by the new office might notice the Dairy Farmers of America sign is still up. Mayor said she is in the process of getting her signs updated, and that is expected to take place soon.

Mayor said an open house is also in the works and will possibly be held after the first of the year.

The tourism commission covers the entire parish, and Mayor said the information she is able to provide is limited only by what she receives. She asks people to let her know about events of a tourism na-ture happening in the parish and to send her the description, flyer or brochure.

Mayor is the commission’s only employee, and it has a seven-member board that meets monthly.

The commission be-longs to several organizations, including the Miss-Lou Rural Tourism Association and Louisiana Travel Promotion Asso-ciation. It also partners with the Southeast Louisiana Gumbo alliance, a marketing consortium.

The participating par-ishes pool their money. Mayor said it is based on the parish’s budget, so Washington’s contribution is smaller than that of Tangipahoa or East Baton Rouge, for example.

The major promotional item produced by SELA Gumbo is an annual cookbook. Mayor said that is handed out at shows, along with smaller items from each parish. Amtrak is one of the group’s sponsors, and she said partner parishes were able to go on a trip this year that included stops in Birmingham, Atlanta and Washington, D.C.

At each location, Mayor was able to discuss the area and what is available in Washington Parish. She said the primary market in the parish is its fairs and festivals.