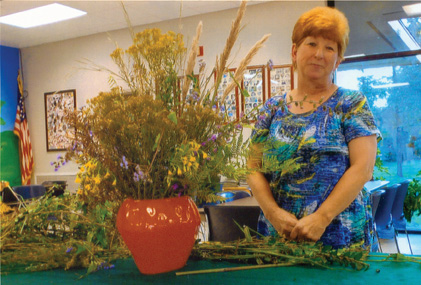 For its October meeting, the Bogalusa Garden Guild met at the Bogalusa Senior Center, with president JoAnne Polk presiding.

After welcoming new members Evelyn Blair and Diane Caldwell, and following the Pledge of Allegiance, she offered the blessing for the food — shrimp pasta, garden salad and dessert — provided by hostesses Lee Mizell and Ellen Taylor.

Guest speaker Doris Dutruch, a native of Enon and well-known for her creative designs at Mile Branch Settlement, was introduced by Margaret Ryals.

For her program Dutruch created an arrangement using wild flowers, grasses, berries and other foliage collected in the woods and encouraged club members to try their hand at making arrangements from natural materials.

In closing, she extended an invitation for everyone to visit her and her sister, Linda Jones, to view the numerous arrangements created in antique containers.

As the meeting came to a close, Bertie Lee won the door prize, yellow mums provided by the hostesses.