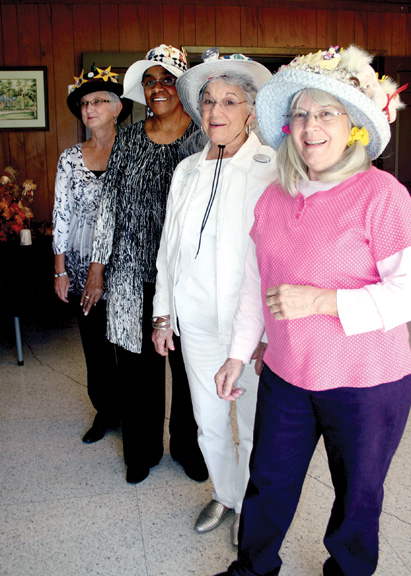 Bogalusa Civic League members filled nearly every table when they gathered at the Bogalusa Country Club for their October luncheon, which featured hats created and modeled by provisional members Katie “Kitty” Baker, Janice Hilaire, Peggye Smith Huddleston and Carol Vacek, all of Bogalusa.

Each of the women, as a requisite for membership in the club, was required to create a hat that would represent the most important or memorable events of her date to date. The ladies also wrote a brief explanation of what the displays they had created meant to them as a way to provide some insight into their lives — and a way for the other members to get to know them a little better.

First up was Baker, whose black velvet hat adorned with red rosettes represented the “shining stars” of her life: her late husband, Robert, and her son, Michael. Being an Army mom filled her with pride, she wrote, but also with worry once Michael was deployed to Afghanistan. Looking for a way to get involved after losing her husband, Baker began volunteering at the Bogalusa Help Center. The soup cans on her hat, she said, represent her love of the center and the people, now friends, who work there. A dog also adorns her hat, representing her three dachshunds, which she says have become an integral part of her life.

Baker retired from Washington-St. Tammany Charity Hospital/ LSU Bogalusa Medical Center as assistant human resource director after 32 years of service. The hospital still holds a special place in her heart, she said, and she affixed her LSU/BMC badge to her black velvet creation.

Denoting something she enjoys, she added a bright yellow riding mower to the mix, saying that riding her mower is her therapy and much cheaper than seeing a psychiatrist. Also on her hat are books, for her love of reading, and crochet hooks, which she uses to keep her hands busy. She said she looks forward to meeting all of the members and serving with them.

Janice Hilaire chose a white summer straw hat for her canvas and filled it with some of the special events in her life. A cross represents her faith and love for her heavenly Father, while the musical notes represent her love of music and dancing, something she and her husband enjoyed together for 28 years. She loves all kinds of music — jazz, blues, hip-hop, gospel and Motown.

A baseball diamond represents the hours spent watching, playing and coaching son Chris’ little league team, Hilaire said. For her daughter she included shoes and a purse, representing the hours spent at her daughter Crystal’s dance recitals. Daughter Stephanie is represented on the hat with musical instruments and more notes.

In addition, her 12 years bowling in a league are represented by the bowling pin, and last, but not least, she said, the sign saying, “Kitchen is closed” reflects the fact that she is now an empty nester.

Just as the straw of the hat is woven to make it strong, she said, the special moments of her life have given her life strength and structure. But foremost, she said, is her love of God’s work that guides her for the life ahead.

Dressed all in white with a silver, Western-style hat as her palette, Peggy Huddleston made the U.S. flag and the Daughters of the American Revolution the focal points of her creation, held in place by a double eagle that once graced the Air Force dress uniform hat of her late husband. She said she has more than 30 years of DAR service.

A gavel denotes the many committees she’s been a part of in the communities in which she has lived. She’s also a member of the Daughters of the Confederacy, she said, represented by a Confederate veteran’s medal, which was worn by a grandfather in 1917 at a reunion of veterans in Little Rock, Ark.

Other items on her hat include an old crank-style telephone representing her years as executive director of the Arkansas Telephone Association, the first female to serve in the capacity. She has been blessed, she said, with a son, James, and a daughter, Denise, and her grandchildren and great-grandchildren.

Her hat also sports a trout lure, which represents her home on the Little Red River, which, she says, is a constant 54 degrees in winter and summer. In addition, her dachshund, “the most important part of her life,” is represented by a small tie tack.

Last, but not least, she said, are the Razorback pigs, the mascot of the University of Arkansas she had hidden under her hat’s brim.

“Considering the loyalties of you LSU fans,” she said, she thought it best to “keep them under my hat.”

Huddleston brought down the house with her exit line: “Age is a matter of mind over matter. If you don’t mind, it don’t matter,” she said over peals of laughter. She attributed the quote to Satchel Paige.

The final model was Carol Vacek, whose love of thrift store shopping was represented by her hat itself.

“I love shopping at thrift stores and rescued this blue straw hat for only $2 — a great bargain,” she wrote. She also loves gardening and flowers, two of her favorite things.

Many plush toys, including a puppy, a cat with three kittens, and a palomino pony, represented her love of animals, especially farm animals. She said she was envious of her cousins who lived on a farm and could ride horses and drive a tractor.

“About all I could do was watch and wish I also lived on a farm,” she wrote.

The Mickey and Minnie Mouse animals represent ambassadors of happiness to the world, according to Vacek, which brighten the lives of children of any age, race or nationality.

Vacek retired from nursing in 2013 and moved to Bogalusa, she said, thinking she could take it easy since she was retired. But having bought an old house, she’s spent many hours on renovations, including painting, hence the paintbrush on her hat.

The judges — Brenda Simon and Ginger Corkern — began conferring as soon as the last model had completed her walk, and before too long, they came up with their decision.

Each lady was a winner. Kittie Baker’s hat was Prettiest. Janice Hilaire’s hat was deemed Most Elegant, and Peggy Huddleston’s creation was the Most Creative. The hat that was considered to be the Most Representative was that of Carol Vacek.

After congratulations and applause, each woman was presented a certificate of participation in the Hat Show. They were also given their Civic League pins, making them full members of the club.

Closing out the meeting, President JoAnne Polk, along with Stewart, handed out door prizes.

The next meeting, the annual fashion show, will be held at at 11 a.m. on Monday, Dec. 2 at the Bogalusa Country Club.