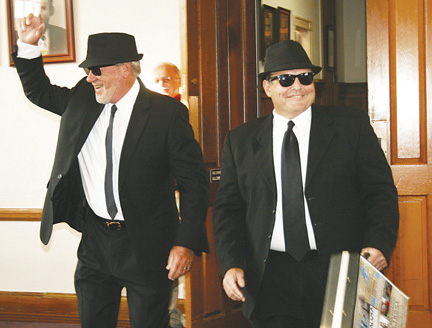 The Bogalusa City Council on Tuesday responded positively to two requests for support from the community and handled some business, but it was not all business as usual.

The first of two public hearings prompted a split on the council. An ordinance on a request for a zoning change at 801 Main St. from B-Business to Heavy Industrial to accommodate a construction yard, including storage, a fabrication shop and an office area, was met with opposition from Councilwoman Oneita Graham.

The address is the vacant property on the corner of Main Street and North Avenue, across from the back gate of the International Paper Mill and on the edge of a residential neighborhood.

Before the vote Graham said she would vote against the change because she could not imagine permitting heavy industry in such a “peaceful” area. The remainder of the council voted in favor of the change, and the measure passed, with Randy Hodge absent.

The council unanimously approved an ordinance to authorize Mayor Charles Mizell to enter into a supplemental agreement regarding a state project to stripe roads within the city.

Two members of the public then requested and received council support for different community projects.

Barbara Hicks-Collins, speaking in behalf of the Robert “Bob” Hicks Foundation, sought support for a project to make the historic home of her father, who was involved in the civil rights movement in Bogalusa, a civil rights museum in order to educate the public and to preserve the contributions made by all of the local participants in the struggle for civil rights. The Hicks home itself figured prominently in the fight.

Hicks-Collins said she had visited other civil rights museums and had envisioned what could be done in Bogalusa. She requested the support of the city in order to move the project forward and said the foundation would seek grants to cover the expenses.

“We want to work together,” she said. “We’re ready to go out and get consultants. It’s time to stop talking and take steps. We want to give Bogalusa a venue.”

The city was in the national headlines for its problems during the civil rights era, Hicks-Collins said.

“But we worked through the problems, and now we’re back to being a Magic City,” she said.

“I think it’s a great idea,” council President Wendy Perrette said. “We are moving forward. But I think it’s important to preserve that history.”

Next up to the dais was Sharrod Darden, a fledgling positive rapper whose career was cut short in 2008 when he was shot in the face during a robbery in Oklahoma.

Darden said he has been unable to work since the incident due to his physical and emotional injuries and multiple surgeries, but that he wants to use his experience to help others. That could include starting a Victims of Violence support group and being a motivational speaker, he said.

“I would like to affect the lives of young people in a positive way,” Darden said. “I want to let them know there is a better way than retaliation.”

Darden said he was looking to do something good in the community before he was shot, and although the blast affected his voice and appearance, his heart is still the same.

“If something positive can be done, I’m here to do it,” he said.

Perrette suggested Darden meet with Bogalusa City School District Superintendent Toni Breaux about being a motivational speaker in the school system, and Graham said the Washington Parish Sheriff’s Office would be another good contact.

Hicks-Collins even jumped in to offer support.

“We have a national motivational speaker on the board of our foundation,” she said. “We will schedule something for Bogalusa.

“We need a combined effort so we can educate our children.”

The meeting started with an announcement of the arrival of special guests. At that point Perrette pressed a button, and the courtroom resounded with the recorded music of “Soul Man.”

Right on cue the doors flung open, and councilmen Teddy Drummond and Doug Ritchie entered attired in black suits and shades. The Blues Brothers were in the building, and officials and members of the public enthusiastically expressed their approval.

Perrette, who was also dressed in black and would later put on her own sunglasses to pose with her fellow council members for pictures, explained that the dramatic interlude was done in support of the Bogalusa Blues and Heritage Festival on Sept. 28 at Cassidy Park. The council members encouraged merchant participation and widespread public support of the event they say “is moving the city forward.”

But the meeting was not about entertainment, and soon returned to council business.