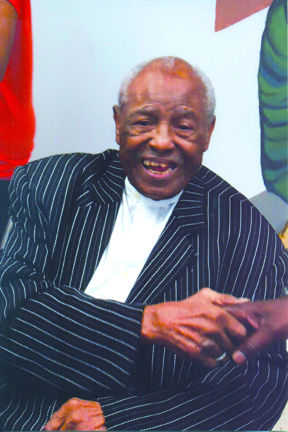 On Sunday, Aug. 11, Henry “Chat” Chatmon, a native of Bogalusa, entered Sweet Baptist Church through the Fellowship Hall as usual, since he always parks his truck out back.

But this was not just a regular Sunday.

Chatmon had celebrated his 90th birthday three days earlier, and he had already been surprised by relatives who came from Gulfport, Biloxi, New Orleans and Covington to join him in fellowship at the church service.

He was, however, unaware of the crowd of people waiting in the rear of the church for his entrance. He was startled and moved to tears when a room full of family and friends started singing, “Happy Birthday.”

The man of honor was born to the late Josephine and Victor Chatmon on Aug. 8, 1923 in Kokomo, Miss. He is the only surviving member of his immediate family, and his wife, Mary McCoy Chatmon, passed on four years ago.

Chatmon, who is well known throughout the community for his playful sense of humor, is a veteran of the U.S. Army. He retired from Crown-Zellerbach and volunteered at the Bogalusa Help Center for more than 20 years. He is a lifelong member of Sweet Beulah Baptist Church.

Though Chatmon has attended funeral services for all of his closest friends and has experienced bad days as well as good ones, he is known to never complain. Like on his surprise Sunday, the tears he has shed during his 90 years have been tears of joy.

Chatmon’s daughter, Shawn Chatmon Jefferson of Bogalusa, hosted the celebration, and other family members and members of Sweet Beulah Baptist Church helped ensure the grand day was a success.