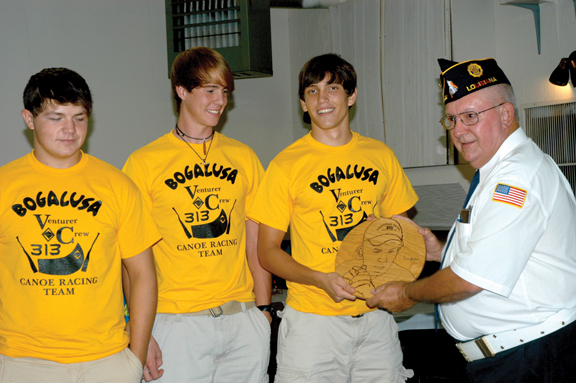 A sea of yellow T-shirts, interspersed with shirts the color of sky-blue water, greeted those who walked into the American Legion Magic City Post 24’s Saturday evening cookout, as the boys of Bogalusa’s Venturer Crew 313 and the girls of Varnado’s Crew 200 gathered to be honored.

The canoers’ families were there, too, sitting with their sons and daughters, their pride shining brightly on their faces. In addition, may other members of the community, including Bogalusa Mayor Charles Mizell and Washington Parish President Richard Thomas, were there to honor the scouts and their leaders.

According to Col. Robert “Bobby” Miller, who for many years has been the leader, coach and biggest cheerleader for the Venturer Crew 313 canoers, one of the most memorable experiences a scout will ever have is participating in the 120-mile National White River Canoe Marathon Race. The challenge, he said, “is formidable, but the rewards are genuine and lasting.”

And this year, for the 47th annual race, both the 313 and 200 crews were able to win all of their respective racing divisions, giving the Venturer 313 Crew its 11th sweep in the race, the first since 2003.

Those who have never spent three days racing a canoe for eight legs in sometimes 43-degree waters, and also carrying said canoes twice around dams, will never truly understand the unbelievably strenuous training and endurance necessary to complete such an incredibly grueling competition, much less to win each division, according to Miller. The hard work, dedication, commitment and incredible competitive effort on the part of those young men and women brought national attention to Bogalusa and to some surrounding Washington Parish communities, he said. For that, they were honored by the Legion with good food, camaraderie and new ball caps proclaiming them national champions. They also brought home the trophies.

As if that weren’t reason enough to celebrate, on the same night, Elette Cooper, the oldest active member of the American Legion in the state of Louisiana, was feted with an ice cream and cake birthday party in celebration of his turning 99 on Aug. 24.

There were many who spoke that evening, praising the champion canoers, including Legion members Mike Henley and Jim Adams, post commander Buddy Fornea, Mizell and Thomas.

Miller, a veteran of the U.S. Marine Corps, thanked everyone who had a hand in sending his young charges to Arkansas for the race, including the American Legion, The Daily News, the city of Bogalusa and all the others who contributed. But he had the most praise for the parents of the racers, thanking them for their unwavering support.

“It’s hard to underestimate the work they have put in,” he said.

Miller, always a teacher and a motivator, said of his crew, “You never fail until you stop trying.”

And he told everyone what he has instilled in each of his canoers: “Win with humility and lose with dignity.”

In the same vein, he said of his scouts, “We don’t showboat, and we don’t offer excuses.” Miller’s pride in each of the racers was evident as he spoke.

Jim Adams, who provided the caps given to each of the team members, talked about how many young men and women, the number of which he estimates to be between 800 and 1,000, have gone through this program over the past 40 years.

“But,” he said, “more impressive is how this program has in some way touched the lives of some 26,000 people in Bogalusa and in Washington and St. Tammany parishes.

“I believe that this group of young people are some of the best in our community,” he said proudly.

He also praised the parents of the scouts.

“This has not been a dumping ground for kids,” he said.

“In Arkansas we had 114 people supporting those young people in order that they might compete.”

According to Miller and Mohan, although the Bogalusa and Varnado crews have set a high bar for themselves to hurdle next year when the 48th annual 120-mile race comes around, the boys and girls of Crew 313 and Crew 200 will be up to the task.