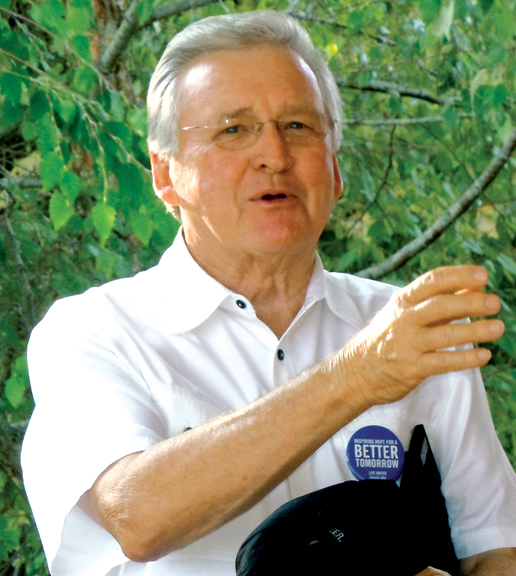 Mike and Betty Gill hosted an outdoor Meet and Greet gathering at their lakefront home in Franklinton to introduce Johnny Crain Jr. as the 2013 campaign chair for the Washington Parish Regional Office of United Way of Southeast Louisiana. They also wanted to thank everyone who had been involved in the 2012 campaign.

Mike Gill is the vice chair of the Washington Parish Leadership Council and also serves on the campaign cabinet and the Board of Trustees of United Way of Southeast Louisiana.

Crain expressed his sincere pleasure in serving United Way, and in accompanying Champagne on many visits to businesses around the parish.

Champagne responded, “Mr. Johnny’s genuine enthusiasm and sincere commitment ensured strong support for United Way.  When it was time to search for the next chair, Johnny Jr. was the perfect choice and a natural progression. I am grateful to both men for their involvement,” she said.

Crain Jr. enthusiastically agreed and said he was honored to be asked to serve.

“I look forward to following in my dad’s footsteps, and I hope to successfully lead the 2013 United Way Campaign in Washington Parish,”  he said.

His first task will be to help Champagne plan a United Way Government Day in September at the Courthouse in Franklinton.

Michael Williamson, president and CEO of United Way of Southeast Louisiana, also expressed his appreciation to Crain Sr. and Crain Jr., as well as the entire Washington Parish Leadership Council for helping to open new doors and to strengthen existing relationships for United Way.  He praised the great work being done by everyone to develop the entire Northshore.

In addition, Champagne thanked the Leadership Council members for their past year of service, and the Top 12 United Way Corporate Contributors in 2012 in Washington Parish.

Guests enjoyed barbequed hamburgers with all the trimmings, plenty of ice-cold beverages, friendly conversation and late afternoon boat rides on the lake.

The official United Way Campaign Kick-Off Luncheon will be held Tuesday, Oct. 1 at noon at ESM United Methodist Church in Bogalusa. The keynote speaker will be Terry Maddox, former Bogalusa resident, newspaper publisher and renowned humorist. Tickets are $10 per person.