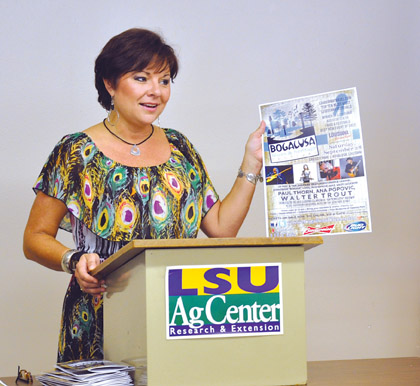 Expanding the event’s reach in its second year, Executive Director Malinda White wants to see the Bogalusa Blues and Heritage Festival have a direct impact on the local economy.

A planned effort to get local businesses involved the night before the fest was one of many aspects of the event White talked about during the Franklinton Chamber of Commerce meeting last week.

Taking place Saturday, Sept. 28 at Cassidy Park, the Blues Fest main stage will boast the talents of headliners Walter Trout, Ana Popovic, Paul Thorn, Vasti Jackson, Homemade Jamz, Johnathon “Boogie” Long and J.D. Hill and the Jammers featuring Chance Casteel. In a new addition, local musicians in a variety of genres will be welcomed to the Heritage Stage as well.

Providing another opportunity for people to hear live music, White has sent out a call to all local restaurants and establishments to hire a musician for the Friday night before the festival. She said the festival will advertise this for the businesses.

They can even choose from a list of area musicians in various price ranges that has already been put together. Those musicians, gathered through social media, have expressed interest in taking part.

Shuttle buses will run every 15-20 minutes and bring attendees from one participating location to the next throughout the night. White said the shuttle buses will travel from the Red Zone on Louisiana Highway 21 to Bogalusa, where several businesses have already hired musicians and Louisiana Avenue will serve as a central location. The final stop will be Birdie’s Roadhouse in Varnado.

White said the reasoning behind this effort is to draw extra people into the businesses the night before the festival.

“Our businesses will be making money because people are going to come,” she said.

Any businesses that would like to get involved are asked to contact White at 294-3895 by early September.