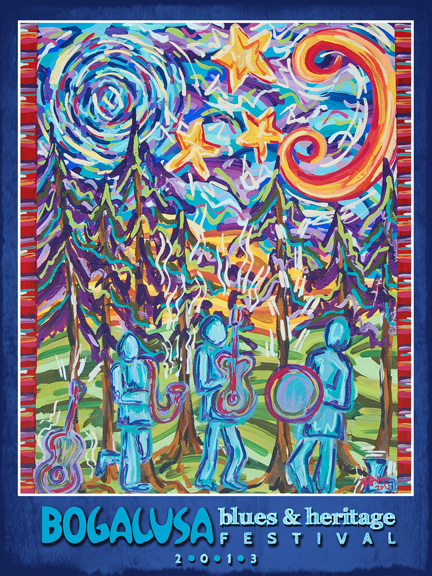 A poster by Trina Stogner, an artist with strong local ties, will serve as the face of this year’s Bogalusa Blues and Heritage Festival.

Currently living in the town where she grew up, Columbiana, Ala., Stogner spent a number of years in Bogalusa and said she still considers it home.

With her design, Stogner said she was trying to capture the feeling of being surrounded by the trees and the beauty of Cassidy Park. A big moon and stars can be seen in the poster, and a group of musicians is painted in the bottom foreground.

Trees and roots feature prominently in the poster, and she said that represents the large group of people trying to “dig deep” and create positive change for the city.

Stogner said she wanted to get all of those things across through the vibrant colors and images that are part of the painting.

“I just wanted it to feel like it had soul,” she said. “I think that’s what the members of the board are trying to capture with the fest. They want to bring some positive soul back to Bogalusa.”

The poster is acrylic on canvas, which is a slight departure from some of Stogner’s other work. She said she does most of her painting with acrylics, but she generally works with tin, old wood or recycled pieces rather than canvas.

Stogner had learned online that poster entries were being sought for the Blues Fest, with family members in Bogalusa letting her know it had been announced in The Daily News.

She submitted her entry and was excited when she received word it had been selected by the Blues Fest board to represent the event.

She is planning to be at the festival this year and said she is looking forward to attending the Sept. 28 event.

Art is something Stogner has always enjoyed. She said she was sketching and drawing from a young age and has been painting since second or third grade. She began art lessons when she was a kid. Her mom had enrolled her in piano, but she said she’d rather take art.

Stogner has been teaching art lessons and painting professionally for more than 15 years.

Her work has been seen at a few shows, including one in Columbiana, and has been displayed more often in conjunction with her art lessons.

When holding shows for the children, she would show her work, too, she said.

She does commissioned work, such as painting murals in people’s homes, and also gets her work out there through word of mouth. She said a person will get something she’s done, and then other people will say they want it.

A graduate of Shelby County High School in Columbiana, Stogner received a scholarship to LSU and went to Baton Rouge to pursue a degree in art education. She found her way to Bogalusa in 1999 and was in the city until last summer.

She said she has lived in Bogalusa almost as long as she’d been in Alabama, and her family now has two places to call home. She has three children, Maggie, 15; Jonathan, 10; and Tanner, 9.

The poster will be available for purchase in the merchandise tent the day of the festival. Posters will be signed and numbered by the artist and will feature the official, embossed Blues Fest seal.

To see more of Stogner’s work or learn about her studio, search for Color Outside the Lines in Columbiana on Facebook.