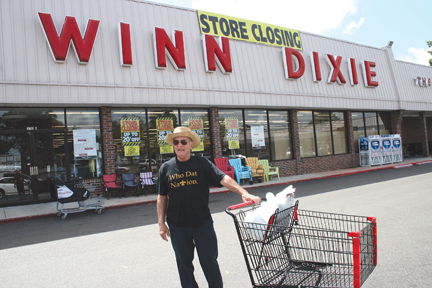 The last day of operation for the Bogalusa Winn-Dixie, which would have celebrated its 50th anniversary this November, won’t be until Oct. 1, but changes are already under way.

This week the store in Pine Tree Plaza changed its hours to 7 a.m. to 9 p.m. and discontinued its Western Union, money order and lottery services as well as its Fuel Perks program.

It also started the markdown process. Discounts are now available on items throughout the store without the need for a Reward Card. Fresh items, including those in the bakery, deli, floral, market, produce and seafood departments, will be discounted in weeks to come.

The store will continue to accept coupons but will no longer honor ads placed by Winn-Dixie. The only sales at the Bogalusa location will be for the store liquidation, and there will generally be no refunds.

On Wednesday, Store Director Mike Piazza said 95 percent of the approximately 60 store employees had already found positions at other Winn-Dixie locations. He also verified the previous information posted by a store employee Tuesday on social media, but said the official confirmation had to come from company headquarters.

The Daily News made contact with Winn-Dixie headquarters Wednesday but had received no detailed response by press time Thursday afternoon.

The company did issue a statement that confirmed the store would close on Oct. 2, and added, “We are proud of our history in Washington Parish and appreciate the support of our customers and Winn-Dixie associates.”

City of Bogalusa Director of Administration Jerry Bailey said he believes when the Winn-Dixie closes, its customers will start patronizing various other groceries in town rather than taking their dollars and the sales tax revenues from the local stream of commerce.

A sampling of customers verified that expectation but also showed some disappointment and concern.

“It kind of frightens me,” said Thomas Kates as he selected a grocery cart. “Winn-Dixie is like a Bogalusa child. It’s been here so long. But new young, innovative stores are taking over, moving the old things out.

“(Winn-Dixie) should have diversified. Businesses are coming in with new, innovative ideas, so you have to be able to compete. And dollar stores are all over the place.”

Amanda Beckham, who was pushing a cart filled with groceries as well as a young child, was concise when asked about the store closing.

Terry Jones, whose cart was overflowing with discounted items, was equally distraught. He said he would continue to buy groceries in Bogalusa but that the Winn-Dixie site was the most convenient for him.

Jones added that he does plan to take advantage of the liquidation sales as the store ramps down.