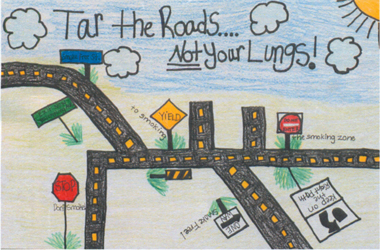 Bowling Green School sixth-grader Abby Stogner will have quite a story to tell when asked what she did over the summer. The bubbly and energetic daughter of Josh and Leigh Stogner participated in the usual fun-in-the-sun activities, and she was one of 31 girls who attended the weeklong Smoky Creek Summer School For Girls. But she also won a trip for herself and her entire family to Washington, D.C., thanks in part to her artistic ability and her steadfast belief in remaining smoke-free.

After winning the statewide “Tar Wars’ poster contest, which she entered as part of her science classwork, Abby’s poster was one of nine in the nation to receive “Special Recognition” at the national poster contest awards ceremony held July 15 at the Hyatt Regency Washington on Capitol Hill. Her original poster design was among the 36 on display.

Abby’s poster, which she said took “just one night” to envision and a couple more evenings to create, depicts roads moving through areas with signs such as “One Way – Smoke Free!” and “Do not enter the smoking zone,” and proclaims the message “Tar the Roads… Not your Lungs!”

Tar Wars is a tobacco prevention program that brings local family physicians and health care providers into schools to teach students about the effects of tobacco on the body and how different messages in tobacco advertising influence people. The program and the annual poster contest are sponsored by the American Academy of Family Practice, held annually, and open to fourth-and fifth-graders in all 50 states, several territories and internationally.

Developed in 1988 by the Hall of Life at the Denver Museum of Natural History and Doctors Ought to Care, the Tar Wars ‘ curriculum was delivered to more than 7,000 Denver fifth-graders. AAFP has overseen Tar Wars since 1997, and the program reaches thousands of students each year and more than nine million since its inception.

As the winner of the Louisiana state contest, Abby and her family were whisked to Washington for the 25th anniversary celebration, with all expenses paid. State winners were shown the sights in the area and visited their U.S. representatives and senators.

Abby’s mom, Leigh Stogner, called her daughter a “real go-getter,” who is wonderfully outgoing and involved in many activities.

“It was a pretty neat thing,” she said. “She was very excited about the trip to Washington.”

And Abby has a personal stake in the anti-smoking campaign, said Mrs. Stogner.

“Her paw paw smoked for 40 years and quit just nine years ago. (Abby) wanted to do this because he now has to take breathing treatments three times a day.

“Her grandmother died of lung cancer,” she added.

When asked how she liked the trip, Abby replied, “It was fun. I learned a whole lot.”

She especially loved the sightseeing with her family.

“It was so fun,” she said laughing. “We went to the Capitol to meet David Vitter and had a doughnut with him. He was really nice. And we went to the White House — we didn’t go inside but we stood outside the gate and took pictures,” she said.

The Lincoln Memorial was another favorite for Abby.

The prize Abby won for her winning entry included $1,000 for the trip to Washington, and she also was given a $25 gift card and a ribbon, she said.

The poster was not her first foray into art, however. The talented middle-schooler has been entering her artwork in the Washington Parish Fair for quite some time, and last year she won Best of Show for her paper mache and fabric dog.

And now that another school year has begun, Abby is ready to turn her attention to being a sixth-grader and coming up with ideas for her artistic submissions for this year’s fair.