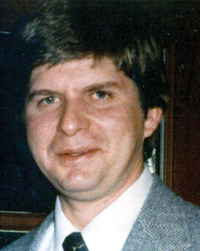 Karl Hampton “Hamp” Burris II, 56, a lifelong resident of Franklinton, passed away at 10:10 a.m. Friday, Aug. 9, 2013, at Canon Hospice in Metairie, following a three-year struggle with head and neck cancer.

Born Sept. 29, 1956, Hamp worked for more than 35 years in the oil industry, his last job as a consultant for New Prospects Company. He was a loving father and grandfather, and an avid hunter and fisherman who most enjoyed spending time with friends at his camp in Mississippi. He faced the end of his illness with remarkable courage, taking great care to plan for those he loved.

He is survived by one son, Jordan Burris; one granddaughter, Adelaide Palmer; two sisters and brothers-in-law, Debra Burris and Stan Caron of New Orleans and Marianna and Donald Jenkins of Franklinton.

In keeping with his wishes, Hamp was cremated and his remains will be scattered at his camp.

Donations may be made in Hamp’s memory online at the American Academy of Otolaryngology-Head and Neck Surgery Foundation website, www.entnet.org/donate.