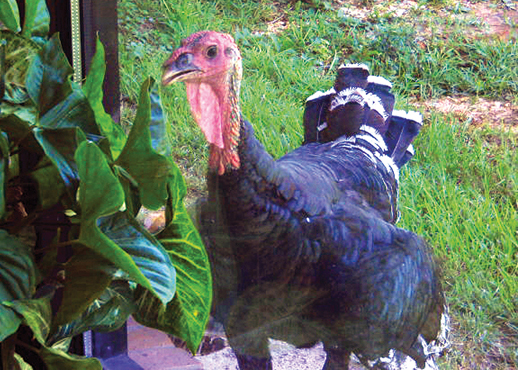 The sudden appearance of a small flock of large birds caused quite a stir in Bogalusa late Tuesday afternoon before the authorities managed to apprehend the critters and throw them in the pen.

By Wednesday the three full-grown turkeys were safely ensconced in the big holding, or transitional, cage in Cassidy Park.

Director of Public Works James Hall said they were lucky they made it.

“Somebody donated them to the park and on day one the mayor and his friend had to get them out of the middle of Willis Avenue with a biscuit,” he said with some amusement.

That friend of Mayor Charles Mizell, Patty Marcomb, who was dressed up and wearing high heels at the time, explained the unexpected turn of events.

“Mother (Lanelle Tannehill) and I were driving up Avenue F from Lee’s Creek toward the park,” she said. “I looked up and there were turkeys on the side of the road. It was 4:30 or 5 o’clock traffic.

“I got out. I had one biscuit from lunch. I started to try to lure them. I threw crumbs one piece at a time. I called Charles, and he rushed over. We got them out of the road.”

But the two good Samaritans knew the footloose fowl could not be trusted to stay out of trouble. Fortunately, Mizell had a key and unlocked the park pen. It’s located on the far side of the park from Willis Avenue. The birds still had a long way to waddle.

“Somebody at the park had peanut butter crackers. The turkeys loved them. They’re tame. They came right up to me. They’re as sweet as can be.”

By then it was getting close to 5:30 p.m. and Mizell had to leave for the City Council meeting.

“Charles said, ‘You have to get them in the pen,’” Marcomb said.

Tannehill, a regular bird watcher who was waiting in the car at the point where her daughter had embarked upon the adventure, was called to drive to the park and start herding turkeys.

“She got behind them and shooed them,” Marcomb said. “We herded them up. They went right in the pen, and lo and behold there was a pan of food there.”

The plan is to keep the turkeys in the pen while they become acclimated to park life.

“For three weeks we’re going to feed, water and play with them,” Hall said. “We’re going to try to tame them so they won’t walk out on Willis and scare the senior citizens.”

The turkeys had paid a stop at the Bogalusa Senior Center during their brief tour of the new neighborhood, according to Mary Distefano, who regaled those at the council meeting with news of the wondrous event.

Bill Woodward snapped off a few pictures and later offered an explanation for the excitement. He said things “slow down” as people age, and that older folks like to watch things around them, things like birds.

“That might explain why the people at the Senior Center on Willis Avenue got excited Tuesday when three turkeys came up to the building and came to look in the windows at all the elders that were trying to see what they were doing,” he said.

“Apparently the turkeys were looking for food, and pecked all around the area before they wandered away. All the seniors had seen turkeys before, but maybe not for several years. These visitors brought back a lot of memories, and it was our excitement for the day.”

For Marcomb, her excitement began soon after the feathered trio left the Senior Center.

Hall said it is hoped that the big, friendly birds will learn to live comfortably within the confines of the park, and that they will provide joy for park visitors for years to come.