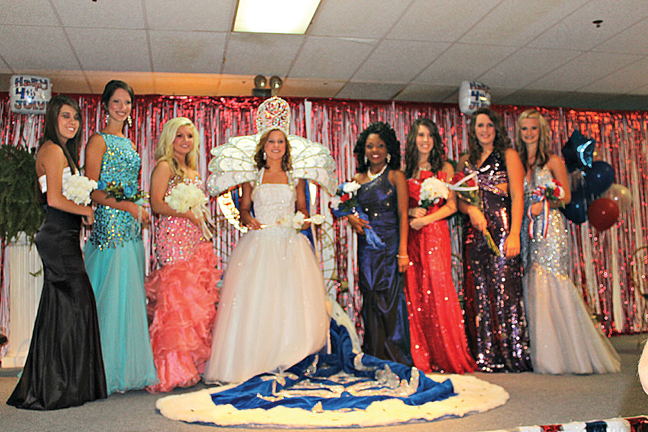 The 74th Paper Queen Ball was held on July 3, saluting real-life princesses from around the world.

The program began with the presentation of the colors by members of American Legion Post 24, accompanied by Gavin Davis representing Uncle Sam. Following the posting of the colors, Sarah Maples Hughes sang the National Anthem and the Rev. Tom Dolph, pastor of E.S.M. United Methodist Church, led the prayer.

American Legion Commander Buddy Fornea welcomed the crowd and thanked them for their continued support of the Paper Queen program and also the American Legion and all of the Independence Day festivities. Fornea recognized Bogalusa Mayor Charles Mizell and invited him to make a few remarks.

Once at the podium, Mizell thanked the American Legion for its continued help with the 4th of July Parade and the fireworks, and thanked retiring Paper Queen Kelsey Knight for the excellent job that she did in not only representing the American Legion but also the City of Bogalusa on her travels across the state. In addition, he acknowledged the other two members of the retiring court, Miss Dixie, Khristian Capo, and Sweetheart of the American Legion, Holly Thomas.

The presentation of the visiting queens and their family members followed, with Mizell thanking them for being a part of the program and for visiting City Hall.

As anticipation grew for the presentation of the new court, the retiring royalty was presented, followed by a grand presentation of the visiting queens, each of whom was individually introduced before parading around the room in sequined gowns with trains and mantels. Each queen introduced herself, and gave a brief, amusing anecdote about her festival.

After all the introductions were completed, it was time for retiring Paper Queen Kelsy Knight to give the final speech of her reign, accompanied by a PowerPoint presentation of pictures from the more than 40 various festivals that she attended during the past year.

The time had come to introduce the 2013 Paper Queen court. First to be presented was of the Court to be presented was Brandi Galloway, representing Victoria, Crown Princess of Sweden, the heir apparent to the Swedish throne and one of 40 real-life royal princesses living around the globe.

Princess Mathilde of Belgium, a real-life princess who is very active in working for women’s empowerment, literacy and education, was represented by Skylar Gates.

Ashley Varnado was the next member of the court to be introduced. She represented Caroline, Princess of Hanover, one the best-known princesses — the daughter of Prince Rainier of Monaco and the late American actress Grace Kelly.

Saudi Arabia’s princess, Princess Amira Al-Taweel, was represented by Sarah Reid. Princess Amira has been working to get women in Arabia the right to drive a car, saying it was terrible that she can drive anywhere in the world with her world driver’s license, with the exception of her own country.

The final member of court, Brittani Galloway, was introduced. She is the twin sister of our the first court member introduced, Brandi Galloway. Brittani represented Princess Maxima of the Netherlands, the wife of the heir apparent to the throne.

The 2013 Sweetheart of the American Legion, Taylor Cotton, was introduced, followed by Award Bearer Molly Gallaspy.

Deshante Burris, the 2013 Miss Dixie, was introduced, and prior to the entrance of the new queen, Kate Pounds, who was the Crown Bearer for her sister, joined the members of the court.

Finally, the big moment had arrived, and with tremendous fanfare, the 2013 Paper Queen, Caitlyn Augustine, was presented to the awaiting crowd.

Following her procession, she was crowned by the mayor and presented a bouquet of red roses from the American Legion and a gift from International Paper.

Clay Magee entertained the court with his rendition of “Proud to be an American,” much to the enjoyment of those in attendance.

Cindy Melancon thanked the Bogalusa High School Jr. ROTC for serving as escorts for the ladies, and reminded everyone to attend the parade.

With that, the program was concluded and everyone was invited to stay for the dance that followed.

The Paper Queen Committee would like to thank John Miles Lumber Company, the staff of Studio in the Country and Cassidy Park Museums staff for entertaining the visiting queens.