What a Joy it was 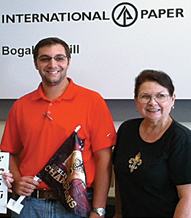 International Paper Company employee Mike Joy, pictured above with Bogalusa Chamber of Commerce Executive Director Marilyn Bateman, could not have been more Joy-ful than he was on Friday when his ticket was drawn as the winner of the Saints season tickets which were raffled off by the Bogalusa Chamber of Commerce. His prize, 2013 Saints season tickets and parking, is worth approximately $5,700. Terry Seal was the second place winner of a Saints pillow. Jerri Giacone Stewart, third place, won a fleur-de-lis crying towel. For selling the most tickets, Kim Venier received a fleur-de-lis pillow. The drawing was held at YoYo’s Mexican Restaurant.