Who killed the Cat in the Hat? 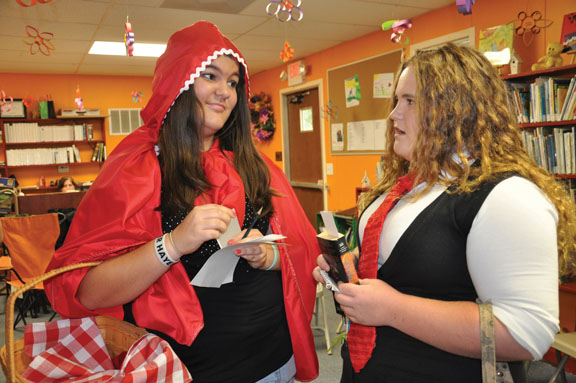 Teens packed into the Enon Library Friday, July 19 for a Murder Mystery dinner, solving clues to find out “Who Killed the Cat in the Hat?”

Branch Manager Becky Dugas said the library system’s theme for the summer was “Dig Into Reading,” and the theme for teen programming was “Beneath the Surface.” She said that made her think of mysteries and things not easily found.

Dugas came up with the idea for the Murder Mystery dinner after a friend told her about a similar event she had hosted. Dugas bought some mystery books and spent the summer plotting out how the event would work and writing the 14 parts to be assigned to teen participants.

Flyers were distributed throughout Franklinton, and the teen nite event was advertised at the Enon Library and other branches and on the library’s Facebook page. Those who wished to participate were asked to register by July 2, providing their address and phone number.

A letter with a formal invitation to help solve the mystery of “Who Killed the Cat in the Hat?” was sent to each teen who signed up, Dugas said.

“I gave them one of the parts that I had written,” she said. “If I knew them, I tried to match a character with them.”

In the invitation, each teen learned about his or her character. Dugas provided the participants with information about the character and suggestions about how they could act out their part and what sort of costume their character would wear.

During the event, teens acted out their parts and worked to solve the clues by reviewing information and asking the other characters questions. There were 20 teen participants and a total of 28 people in the library, including staff members and parents.

Teens were treated to chips, snacks and pizza at the start of the event and banana splits as it was wrapping up. At the end, the killer was revealed to be Alice from “Alice in Wonderland,” and awards were presented in categories like best costume and best acting.

Damianna Davis, an Enon resident who is going into her sophomore year at Franklinton High School, said she came to every teen nite during the summer, when the programs were held each Friday.

Davis, portraying Hermione Granger from the Harry Potter books, dressed and spoke as her British character would have. She said she enjoyed the Murder Mystery dinner.

“It was fun,” she said. “I liked the costumes, and I liked talking in a British accent.”

Solving the mystery was a difficult task, said Josh Brewster, who portrayed Robin Hood. He will be a seventh-grader at Franklinton Junior High this year and was attending his first teen nite.

“It was hard,” he said. “You had to find out clues. You had to ask people you thought were the killer questions.”

Dugas said she thinks everyone who took part had fun.

“It was hard work, but it was worth it in the end,” she said, adding that she hopes they all come back if she holds another murder mystery in the future.

In addition to the Murder Mystery dinner, some of the big teen nite hits this summer were Just Dance and an activity during which the teens made duct tape wallets, Dugas said.

At the Enon Library, teen nites take place monthly during the school year, on the last Friday of each month. The next one will be held Aug. 30 from 5-7 p.m.